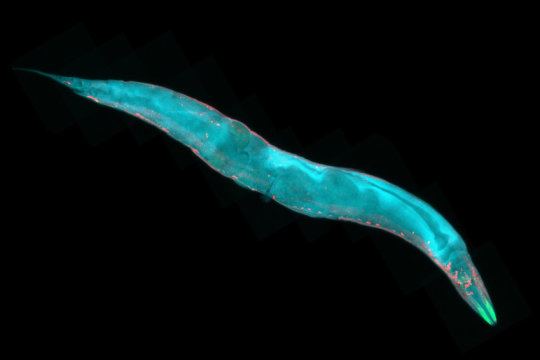 An enzyme-blocking molecule can extend the lifespan of Caenorhabditis elegans roundworms by as much as 45 percent, largely by modulating a cannabinoid biological pathway, according to a study from scientists at Scripps Research.

The scientists, whose work is published on March 25 in Nature Chemical Biology, also showed that the lifespan-extending cannabinoid pathway in C. elegans is related in unexpected ways to cannabinoid pathways found in humans and other mammals.

“This study reveals a new life-extension pathway, but more broadly, it introduces a powerful method for applying chemical probes to lab animals such as worms to discover biology that may be relevant to humans,” says study senior author Benjamin Cravatt, PhD, Professor and Gilula Chair of Chemical Biology at Scripps Research.

Cravatt is known for his development of advanced “chemical proteomics” methods for studying enzymes and the biological pathways they regulate. In the new study his team deployed these methods to investigate aging in C. elegans roundworms. The tiny worms normally live for just a few weeks — compared to two or three years for lab mice — making them, in principle, more practical for lifespan studies.

Lifespan studies using C. elegans worms typically involve the deletion or silencing of a particular gene in the embryonic stage of life to see if that extends the average lifespan of affected animals. The Cravatt team’s approach, by contrast, was to use small-molecule compounds to disrupt enzyme-related pathways in adult worms, in the hope that this would uncover pathways that regulate lifespan.

“The beauty of this approach is that any lifespan-extending compounds we identify can be useful tools to study whether the same mechanisms and targets also modulate aging in mammals,” says study co-author Michael Petrascheck, PhD, associate professor in the Department of Molecular Medicine at Scripps Research.

The team used a library of about 100 such compounds, all known to inhibit enzymes called serine hydrolases in mammals. “Metabolic processes are very important in determining the rate of aging and lifespan, and serine hydrolases are major metabolic enzymes, so we thought there was a good chance we’d find an important aging-related enzyme this way,” says study first author Alice Chen, a graduate student in the Cravatt lab.

After finding ways to get the compounds through the tough outer skin of the worms, Chen tested them on worms that were 1 day into adulthood, and found that some of the compounds extended average worm lifespan by at least 15 percent. One, a carbamate compound called JZL184, extended worm lifespan by 45 percent at the optimal dose. More than half the worms treated with JZL184 were still alive and apparently healthy at 30 days, a time when virtually all untreated worms were dead of old age.

JZL184 was originally developed by the Cravatt lab as an inhibitor of the mammalian enzyme monoacylglycerol lipase (MAGL), whose normal job includes the breakdown of a molecule called 2-AG. The latter is an important neurotransmitter and is known as an endogenous cannabinoid (“endocannabinoid”) because it activates one of the receptors hit by the main psychoactive component in cannabis.

Curiously however, a corresponding MAGL enzyme does not exist in C. elegans worms, so JZL184’s target in these animals was a mystery. Chen soon found, though, that one of the main target enzymes for JZL184 in worms was fatty acid amide hydrolase 4 (FAAH-4). Although FAAH-4 and MAGL are not related in terms of their amino-acid sequences or 3-D folds, further experiments revealed, surprisingly, that FAAH-4 in worms does what MAGL does in humans and other mammals: it breaks down 2-AG.

2-AG has been linked to aging in mammals; one recent study found evidence that its levels fall in the brains of aging mice, likely due to greater MAGL activity. The results suggest, then, that studying the FAAH-4/2-AG pathway in worms could one day yield lifespan-extending strategies for humans.

“It seems at least plausible at this point that both worms and mammals have a cannabinoid-related signaling pathway that affects longevity and possibly aging-related disorders,” Cravatt says.

The study demonstrates more generally how libraries of small-molecule compounds and associated proteomics techniques can be used to reveal biological pathways that evolutionarily distant lab animals such as worms have in common with humans.

“In principle, with this approach one can quickly find a compound that has a desired biological effect and also find the target through which it works, all in a live and relatively complex model organism,” Cravatt says.

The research was supported by the National Institutes of Health (DA033760, CA215249), the Damon Runyon Cancer Research Foundation, and Abide Therapeutics, Inc.