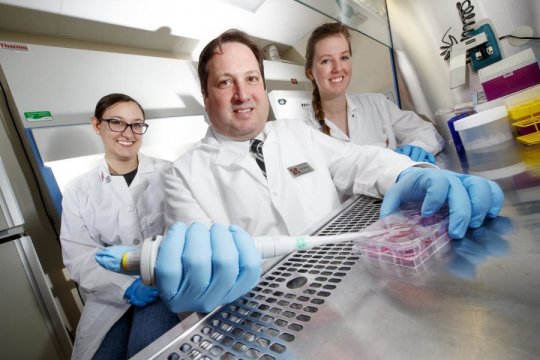 University of Nebraska-Lincoln researchers may have identified a vaccine that would defend against Zika virus without producing antibodies.

Researcher Eric Weaver described the finding as exciting and novel. He and his team are confident that future experiments will yield significant findings that could have profound impact on the field of vaccinology.

Weaver is an assistant professor of biological sciences affiliated with the Nebraska Center for Virology.

Many reports show that antibodies against Zika virus can worsen Dengue virus infection, which, like Zika, is caused by a mosquito-borne virus. This phenomenon is referred to as antibody-dependent enhancement (ADE) of disease. This has been an obstacle to the development of effective and safe Dengue virus vaccines.

“If you have immunity to one of these viruses and get infected by a second one, the illness can be much worse,” Weaver said. “The body makes the wrong immune response.”

Weaver’s team, which includes doctoral students Brianna Bullard and Brigette Corder, have been studying potential Zika vaccines since 2016, shortly after a Zika outbreak in Brazil that was declared a global public health emergency by the World Health Organization.

First discovered in Uganda’s Zika Forest in 1947, the virus initially was believed to cause only mild or asymptomatic infection in humans. However, outbreaks in Brazil in 2015 and 2016 resulted in higher than historical rates of congenital birth defects in babies born to infected mothers and an increase in the neurological disorder Guillain-Barré syndrome in adults.

In 2016, between 500,000 to 1.5 million suspected cases of Zika infection were reported worldwide, with 4,300 related cases of microcephaly, or abnormally small heads, in infants.

Bullard, who is from St. Louis, developed a genetically altered version of Adenovirus while working with Weaver as an undergraduate — though she didn’t have enough time to test it before her summer program came to an end. She was eager to return to the project after she graduated from Truman State in December 2016.

“I’m interested in viruses in general and I want to do research in an applied, translational setting,” she said. “I’m most excited about making vaccines that can help people. We’re working on Zika right now, but we also have projects relating to influenza.”

In a study reported in December in Scientific Reports, the Nebraska scientists used two forms of attenuated Adenovirus to serve as vectors to deliver the Zika vaccine. Adenoviruses, which typically cause mild illness such as the common cold, are modified so that they are replication-defective and incapable of causing disease. The modified, or attenuated viruses, are regarded as safe and highly effective vaccine vectors capable of inducing long-lasting protective immune responses against infectious pathogens.

They inserted the prM-E structural genes of Zika into key areas of Adenovirus Type 4 and Adenovirus Type 5 genomes. Tested in mice, both vaccines offered strong T-cell responses and substantial protection against Zika infection. However, the vaccine based on Type 4 Adenovirus induced strong T-cell responses with undetectable antibodies. T cells are a type of white blood cell that are at the core of the system that tailors the body’s adaptive immune response to specific pathogens.

“To our knowledge, this is the first report of a vaccine that uses the prM-E genes of Zika virus to induce protective immunity without inducing anti-Zika virus antibodies,” Weaver said. “The lack of antibodies may very well circumvent the potential risks of ADE resulting in an effective and safer vaccine than those currently in clinical trials.”

Weaver said more studies are needed in order to determine why one virus vector had different results than the other. “We hope that we can produce a safer vaccine,” he said. “If we can figure out the mechanism, we might be able to apply it to other vaccine strategies.”

Matthew Gorman and Michael S. Diamond of the Washington University School of Medicine Departments of Medicine, Molecular Microbiology, Pathology and Immunity, also collaborated on the research.