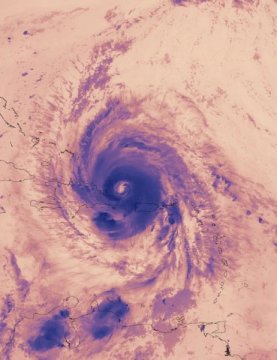 When Hurricane Maria struck Puerto Rico head-on as a Category 4 storm with winds up to 155 miles per hour in September 2017, it damaged homes, flooded towns, devastated the island’s forests and caused the longest electricity black-out in U.S. history.

Two new NASA research efforts delve into Hurricane Maria’s far-reaching effects on the island’s forests as seen in aerial surveys and on its residents’ energy and electricity access as seen in data from space. The findings, presented Monday at the American Geophysical Union meeting in Washington, illustrate the staggering scope of Hurricane Maria’s damage to both the natural environment and communities.

At night, Earth is lit up in bright strings of roads dotted with pearl-like cities and towns as human-made artificial light takes center stage. During Hurricane Maria, Puerto Rico’s lights went out.

In the days, weeks and months that followed, research physical scientist Miguel Román at NASA’s Goddard Space Flight Center in Greenbelt, Maryland, and his colleagues developed neighborhood-scale maps of lighting in communities across Puerto Rico. To do this, they combined daily satellite data of Earth at night from the NASA/NOAA Suomi National Polar-orbiting Partnership satellite with USGS/NASA Landsat data and OpenStreetMap data. They monitored where and when the electricity grid was restored, and analyzed the demographics and physical attributes of neighborhoods longest affected by the power outages.

A disproportionate share of long-duration power failures occurred in rural communities. The study found that 41 percent of Puerto Rico’s rural municipalities experienced prolonged periods of outage, compared to 29 percent of urban areas. When combined, power failures across Puerto Rico’s rural communities accounted for 61 percent of the estimated cost of 3.9 billion customer-interruption hours, six months after Hurricane Maria. These regions are primarily rural in the mountainous interior of the island where residents were without power for over 120 days. However, even more heavily populated areas had variable recovery rates between neighborhoods, with suburbs often lagging behind urban centers.

The difference between urban and rural recovery rates is in part because of the centralized set-up of Puerto Rico’s energy grid that directs all power to prioritized locations rather than based on proximity to the nearest power plant, Román said. Areas were prioritized, in part, based on their population densities, which is a disadvantage to rural areas. Within cities, detached houses and low-density suburban areas were also without power longer.

“It’s not just the electricity being lost,” Román said. “Storm damage to roads, high-voltage power lines and bridges resulted in cascading failures across multiple sectors, making many areas inaccessible to recovery efforts. So people lost access to other basic services like running water, sanitation, and food for extended time periods.”

The absence of electricity as seen in the night lights data offers a new way to visualize storm impacts to vulnerable communities across the entirety of Puerto Rico on a daily basis. It’s an indicator visible from space that critical infrastructure, beyond power, may be damaged as well, including access to fuel and other necessary supplies. The local communities with long-duration power outages also correspond to areas that reported lack of access to medical resources.

The next step for Román when looking at future disasters is to go beyond night lights data and sync it up with updated information on local infrastructure — roads, bridges, internet connectivity, clean water sources — so that when the lights are out, disaster responders can cross-reference energy data with other infrastructure bottlenecks that needs to be solved first, which would help identify at-risk communities and allocate resources.

Hurricane Maria’s lashing rain and winds also transformed Puerto Rico’s lush tropical rainforest landscape. Research scientist Doug Morton of Goddard was part of the team of NASA researchers who had surveyed Puerto Rico’s forests six months before the storm. The team used Goddard’s Lidar, Hyperspectral, and Thermal (G-LiHT) Airborne Imager, a system designed to study the structure and species composition of forests. Shooting 600,000 laser pulses per second, G-LiHT produces a 3D view of the forest structure in high resolution, showing individual trees in high detail from the ground to treetop. In April 2018, post-Maria, the team went back and surveyed the same tracks as in 2017.

Comparing the before and after data, the team found that 40 to 60 percent of the tall trees that formed the canopy of the forest were damaged, either snapped in half, uprooted by strong winds or lost large branches.

“Maria gave the island’s forests a haircut,” said Morton. “The island lost so many large trees that the overall height of forests was shortened by one-third. We basically saw 60 years’ worth of what we would otherwise consider natural treefall disturbances happen in one day.”

The extensive damage to Puerto Rico’s forests had far-reaching effects, Morton said. Fallen trees that no longer stabilize soil on slopes with their roots as well as downed branches can contribute to landslides and debris flows, increased erosion, and poor water quality in streams and rivers where sediments build up.

In addition, the lidar surveys across the island corroborate findings presented at AGU by ecologist Maria Uriarte at Columbia University in New York City, who looked at tree death and damage rates in ground plots at the National Science Foundation Luquillo Long-Term Ecological Research site. Uriarte found certain tree species were more susceptible to the high wind damage, while others such as the palms, survived at higher rates, along with shrubs and shorter trees in the understory.

Morton and Uriarte will continue to follow the fate of Puerto Rican forests as they recover from hurricane damages using laser technology from the ground to make detailed measurements of forest regrowth.