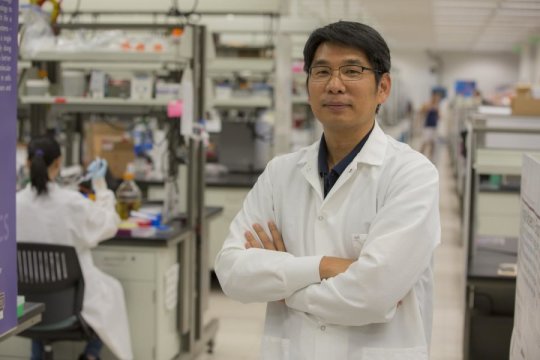 Knots are indispensable tools for such human activities as sailing, fishing and rock climbing, (not to mention, tying shoes). But tying a knot in a lacelike strand of DNA, measuring just billionths of a meter in length, requires patience and highly specialized expertise.

Hao Yan, a researcher at ASU, is a practiced hand in this delicate and exotic field, operating at the crossroads of nanotechnology and fine art.

In new research appearing in the journal Nature Communications, Yan and his colleagues Fei Zhang, Xiaodong Qi and others describe a method for coaxing segments of single-stranded DNA into complex 2- and 3D knotted structures.

The results represent an important advance in the fast-paced field of DNA nanotechnology, in which the molecule of life is used as a structural building material for a vast array of tiny configurations. Among these are miniscule robotic devices, photonic applications, drug delivery systems, logic gates, as well as diagnostic and therapeutic applications.

“The knotted DNA structures demonstrated in this work exhibit unprecedented topological complexity, far beyond what has been achieved before using single stranded folding,” Yan says. “Indeed, it is not only amazing but also surprising that the single-stranded DNA and RNA can thread through its own chains and find a way to form such highly knotted structures, given the fact that the single strand has to weave through so many tangles.”

Yan directs the Biodesign Center for Molecular Design and Biomimetics and is the Martin D. Glick Distinguished Professor in the School of Molecular Sciences at ASU.

Bringing DNA into the fold

The new study involves innovations in the field of DNA origami, which, as the name implies, uses nucleic acids like DNA and RNA to fold and self-assemble into complex forms. This occurs when complementary nucleotide bases in DNA’s 4-letter alphabet come in contact and bind, according to a strict regimen: C bases always pair with G and A bases always pair with T.

In nature, strings of nucleic acids provide the code needed to make complex proteins. This basic biology provides the underpinning for all earthly life. Taking advantage of the simple base-pairing properties of DNA, it is possible to design structures that will self-assemble in the lab. The method has been applied to both single-stranded and double-stranded DNA forms, resulting in nanostructures of increasing complexity and sophistication.

While DNA origami has made startling advances since its inception, one technical innovation has been vexingly difficult to achieve. Until now, creating complex knotted structures in DNA in a predictable and programmable way has eluded researchers.

The new work overcomes this hurdle, establishing precise design rules that permit single-stranded segments of DNA (or RNA) ranging from 1800-7500 nucleotides to form knot-like nanostructures with crossing numbers (where the DNA strand weaves in and out of its own length) ranging from 9 to 57.

The group further demonstrated that these nucleic acid nanostructures can be replicated and amplified, both under laboratory conditions and within living systems.

Knotted structures, like those Yan has fabricated, (but much simpler than the synthetic ones), have correlates in the natural world. They have been observed in DNA and proteins and generally form during replication and transcription, (when a DNA sequence is copied into messenger RNA). They can also occur in the genomes of phages — viruses that infect bacterial cells.

Nevertheless, the construction of molecular knots at the nanometer scale, displaying well-defined and consistent geometries requires enormous control and precision. As it happens, nucleic acids like DNA are ideal for the design and synthesis of such molecular knots.

Previously, lengths of double-stranded DNA have been used for nanoscale constructions, with the addition of short pieces or “staple strands” to fasten resulting structures together. The new study instead uses a single length of DNA designed to wrap around itself in a precise, pre-programmed sequence of steps.

Once the knotted DNA nanostructures successfully assemble themselves, they are imaged using atomic force microscopy. Careful calculation allows the researchers to optimize the folding pathways to produce the highest yield for each synthetic structure. The use of single- rather than double-stranded DNA allows the structures to be produced in abundance at much lower cost.

A single-stranded approach opens the door for the design of nanoarchitectures with specific, well-defined functions, which can be produced through successive rounds of in vitro evolution, where desired attributes are selected for in a repetitive process of refinement. Further, the approach outlined in the new study provides a general platform for the design of molecular structures of increased size and unprecedented complexity, paving the way for advances in nanophotonics, drug delivery, cryo-EM analysis and DNA-based memory storage.

For one of the initial knot designs the strategy Yan and his colleagues developed involved threading a single strand of DNA or RNA through itself 9 times according to a pre-programmed sequence, demonstrating that the new method is capable of producing intricate geometric shapes that are programmable, replicable and scalable.

The design strategy was subsequently expanded to include single-stranded RNA structures and 3D DNA knots, whose forms were reconstructed using a technique known as cryogenic transmission electron microscopy, confirming their proper folding into the desired shapes.

“One of the challenges in this work is how to increase the assembly yield of highly knotted structures.” Said Fei. Unlike classic DNA nanostructures, the single-stranded knots are less forgiving in terms of precise folding order due to the topological complexity. If a single crossing is misfolded during the process, the error will hardly be self-corrected and most of the misfoldings will remain in the completed structure. “We developed a hierarchical folding strategy to guide the correct formation of knots. We compared the folding efficiency of a knot with 23 crossings by using different folding pathways. The AFM images showed a dramatic increase in the folding yield of well-form structures from 0.9% to 57.9% by applying optimized hierarchical folding pathway.” Fei added.

The design rules used to optimize the folding pathways are based on the number of crossing points, the length of DNA and the number of base pairs in the designed structure. Three primary rules were established. First, linear folding paths were found to be preferable to branched paths. Second, the unfolded section of a DNA strand should not thread through itself in the early stages when the strand is still long. Finally, edges of the desired form that have three crossings should fold before those with two crossings.

Longer chains of single-stranded DNA pose unique challenges for designing programmed nanostructures due to the increased likelihood of unintended self-complementarity of the bases making up the chain. A DNA knot structure boasting 57 crossed nodes successfully assembled, though with lower yield and less precision. When the crossing number was increased to 67, the yield significantly dropped and the resulting structures, imaged by AFM, showed more errors of assembly.

The study reports the largest DNA knots yet assembled, formed from up to 7.5k bases, featuring the most complicated topologies, with up to 57 crossing regions. The single-stranded DNA sequences can be mass produced in living cells for greater efficiency at lower cost. Ultimately, DNA nanostructures of diverse function may be formed within cells, innovations to be pursued in future work.