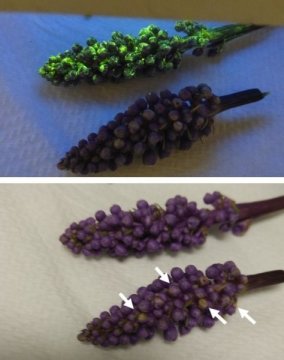 Science-fiction writers have long envisioned human¬-machine hybrids that wield extraordinary powers. However, “super plants” with integrated nanomaterials may be much closer to reality than cyborgs. Today, scientists report the development of plants that can make nanomaterials called metal-organic frameworks (MOFs) and the application of MOFs as coatings on plants. The augmented plants could potentially perform useful new functions, such as sensing chemicals or harvesting light more efficiently.

According to the project’s lead researcher, Joseph Richardson, Ph.D., humans have been introducing foreign materials to plants for thousands of years. “One example of this is flower dyeing,” he says. “You’d immerse a cut flower stem into some dye, and the dye would be taken up through the stem and penetrate into the flower petals, and then you’d see these beautiful colors.”

Because of their extensive vascular networks, plants readily absorb water and molecules dissolved in fluids. However, it’s more difficult for larger materials and nanoparticles such as MOFs to penetrate roots. So Richardson and colleagues at the University of Melbourne (Australia) wondered if they could feed plants MOF precursors, which the plants would absorb and then convert into finished nanomaterials.

MOFs — which consist of metal ions or clusters linked to organic molecules — form highly porous crystals that can sop up, store and release other molecules, much like a sponge. Chemists have made thousands of different MOFs so far, with potential applications ranging from storing hydrogen fuel to absorbing greenhouse gases to delivering medications within the body. Having plants make small amounts of these useful compounds in their own tissues could give them new abilities not seen in nature.

To see whether plants could make MOFs, Richardson and colleagues added metal salts and organic linkers to water and then placed cuttings or intact plants into the solution. The plants transported the precursors into their tissues, where two different types of fluorescent MOF crystals grew. In a proof-of-concept experiment, MOF-producing lotus plant clippings detected small concentrations of acetone in water, as shown by a decrease in fluorescence of the materials. Based on these results, Richardson plans to explore whether plant-MOF hybrids could sense explosives or other volatile chemicals, which could be useful for airport security.

In addition to having the plants make MOFs, the finished materials could be used as a coating on the plants to help them convert harmful ultraviolet (UV) rays into light that’s more useful for photosynthesis. “As we contemplate growing crops in space or on Mars where you don’t have an atmosphere and are bombarded by UV rays, something like this could be helpful,” Richardson says. “That’s because it not only protects the plants from the UV rays, but it also turns them into useful energy. Especially as you get farther away from the sun, it’s harder to capture all of the light you’d need for photosynthesis.”

The researchers have already started examining the protective abilities of the nanomaterials, and the preliminary data are promising. The team coated clippings of chrysanthemum and lilyturf with luminescent MOFs and then exposed the plants to UVC light for three hours. Compared with uncoated clippings, the plants with MOFs showed less wilting and bleaching.

Now, Richardson is teaming up with plant biologists to study the effects of MOFs on plant growth. So far, they haven’t noticed any toxicity of the nanomaterials. The researchers also want to explore whether MOFs could actually help plants grow better, which may lead to applications in agriculture.