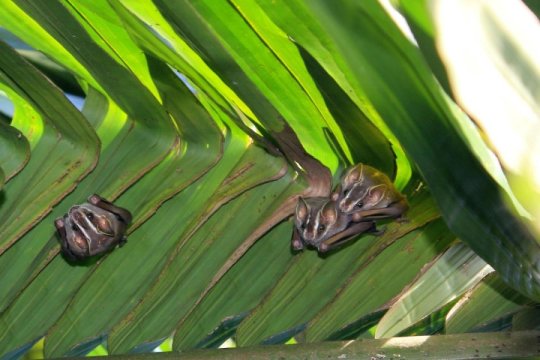 Baby birds learn to fly. Baby mammals switch from milk to solid food. Baby bats, as winged mammals, do both at the same time during their transition from infants to flying juveniles. According to a new report from researchers at the Smithsonian Tropical Research Institute (STRI) who studied Peters’ tent-making bats (Uroderma bilobatum), mothers prod their young with their forearms, perhaps encouraging them to fledge and wean.

Of the more than 1,300 bat species in the world, details of this critical transition period are only known for a few. “Our study highlights how little we still know about the secret lives of these amazing creatures, even something as significant as the relationship between a mother and her baby,” said Jenna Kohles, masters student at the University of Konstanz and Max Planck Institute for Ornithology under the direction of professor Dina Dechmann. Kohles did her fieldwork for this study as an intern at STRI under the supervision of STRI postdoctoral fellow Teague O’Mara while she was an undergraduate at Clemson University.

Tent-making bats snip and fold huge leaves of tropical plants to create tents as shelters for groups from two to 50 individuals. They also colonize the gently sloping eaves of the tropical bungalows humans build to keep out the rain. Their roosts not only protect breeding bats from the elements, but also serve as information centers where individuals learn the location of their favorite food — ripe figs — from other bats.

“Jenna Kohles and her team closely observed colonies of tent-making bats in the wild and monitored roosts under the eaves of more than 30 houses in Gamboa, Panama for nearly a full year,” said her STRI advisor, staff scientist Rachel Page. “Jenna caught bat births on camera, and subsequently monitored and quantified changes in mother-pup interactions.”

Kohles determined whether pups were alone or with their mother, and suckling or not suckling, shifting from one position to another, flapping or resting. She recorded aggressive and other social interactions and noted when mothers groomed their pups. With her colleagues, she also netted roosting bats to record their mass, forearm length, sex and roosting location to see if pups of this species grow as quickly as that reported for other tropical species and to compare the timings of size changes with behavioral changes.

Other small mammals such as mice give birth to litters of more than half a dozen babies at a time, but bats usually give birth to only one pup at a time, because mothers have to support all of the baby’s weight while flying both before and after it is born.

“It’s in the pups’ best interest to continue nursing and being cared for by their mothers for as long as possible. But this is a big burden for mothers, so they push the pups to become independent,” Kohles said. “For many mammals, this results in a period of mother-offspring conflict, often including aggression. But these bats appear to accomplish this transition without aggression, and these forearm nudges may play an important role here. That’s why we were excited about observing this novel behavior.

“As the only flying mammals, bats have numerous unique life history traits,” Kohles continued. “Pups must grow up very quickly. Now we’re learning about the specific behaviors both pups and mothers use to deal with this rapid transition. And they’re as unique as the bats themselves.”

Bat pups’ arms grew faster than the rest of their bodies. With these large forearms pups could learn to fly in just a few nights with help from their mothers. Although Kohles and her team could only directly observe behavior in the roost, they found evidence that pups were retrieved and carried back into the roost by mothers while learning to fly.

“Very little is known about behavioral development in bats. Jenna’s study is a step toward filling a critical gap in our understanding of bat development,” Page said.