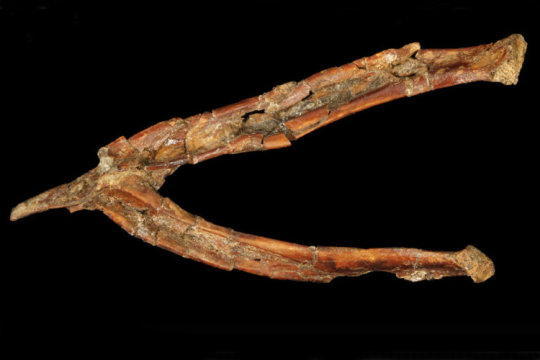 During the late Cretaceous period, more than 65 million years ago, birds belonging to hundreds of different species flitted around the dinosaurs and through the forests as abundantly as they flit about our woods and fields today.

But after the cataclysm that wiped out most of the dinosaurs, only one group of birds remained: the ancestors of the birds we see today. Why did only one family survive the mass extinction?

A newly described fossil from one of those extinct bird groups, cousins of today’s birds, deepens that mystery.

The 75-million-year-old fossil, from a bird about the size of a turkey vulture, is the most complete skeleton discovered in North America of what are called enantiornithines (pronounced en-an-tea-or’-neth-eens), or opposite birds. Discovered in the Grand Staircase-Escalante area of Utah in 1992 by University of California, Berkeley, paleontologist Howard Hutchison, the fossil lay relatively untouched in University of California Museum of Paleontology at Berkeley until doctoral student Jessie Atterholt learned about it in 2009 and asked to study it.

Atterholt and Hutchison collaborated with Jingmai O’Conner, the leading expert on enantiornithines, to perform a detailed analysis of the fossil. Based on their study, enantiornithines in the late Cretaceous were the aerodynamic equals of the ancestors of today’s birds, able to fly strongly and agilely.

“We know that birds in the early Cretaceous, about 115 to 130 million years ago, were capable of flight but probably not as well adapted for it as modern birds,” said Atterholt, who is now an assistant professor and human anatomy instructor at the Western University of Health Sciences in Pomona, California. “What this new fossil shows is that enantiornithines, though totally separate from modern birds, evolved some of the same adaptations for highly refined, advanced flight styles.”

The fossil’s breast bone or sternum, where flight muscles attach, is more deeply keeled than other enantiornithines, implying a larger muscle and stronger flight more similar to modern birds. The wishbone is more V-shaped, like the wishbone of modern birds and unlike the U-shaped wishbone of earlier avians and their dinosaur ancestors. The wishbone or furcula is flexible and stores energy released during the wing stroke.

If enantiornithines in the late Cretaceous were just as advanced as modern birds, however, why did they die out with the dinosaurs while the ancestors of modern birds did not?

“This particular bird is about 75 million years old, about 10 million years before the die-off,” Atterholt said. “One of the really interesting and mysterious things about enantiornithines is that we find them throughout the Cretaceous, for roughly 100 million years of existence, and they were very successful. We find their fossils on every continent, all over the world, and their fossils are very, very common, in a lot of areas more common than the group that led to modern birds. And yet modern birds survived the extinction while enantiornithines go extinct.”

“I think it is a really interesting hypothesis and the best explanation I have heard so far,” Atterholt said. “But we need to do really rigorous studies of enantiornithines’ ecology, because right now that part of the puzzle is a little hand-wavey.”

Atterholt, Hutchison and O’Connor, who is at the Institute of Vertebrate Paleontology and Paleoanthropology in Beijing, China, published an analysis of the fossil today in the open-access journal PeerJ.

All birds evolved from feathered theropods — the two-legged dinosaurs like T. rex — beginning about 150 million years ago, and developed into many lineages in the Cretaceous, between 146 and 65 million years ago.

Hutchison said that he came across the fossil eroding out of the ground in the rugged badlands of the Kaiparowits formation in the Grand Staircase-Escalante National Monument in Garfield County, Utah, just inside the boundary of the recently reduced monument. Having found bird fossils before, he recognized it as a late Cretaceous enantiornithine, and a rare one at that. Most birds from the Americas are from the late Cretaceous (100-66 million years ago) and known only from a single foot bone, often the metatarsus. This fossil was almost complete, missing only its head.

“In 1992, I was looking primarily for turtles,” Hutchison said. “But I pick up everything because I am interested in the total fauna. The other animals they occur with tells me more about the habitat.”

According to Hutchison, the area where the fossil was found dates from between 77 and 75 million years ago and was probably a major delta, like the Mississippi River delta, tropical and forested with lots of dinosaurs but also crocodiles, alligators, turtles and fish.

Unlike most bird fossils found outside America, in particular those from China, the fossil was not smashed flat. The classic early Cretaceous bird, Archaeopteryx, was flattened in sandstone, which preserved a beautiful panoply of feathers and the skeletal layout. Chinese enantiornithines, mostly from the early Cretaceous, are equally beautiful and smashed flatter than a pancake.

“On one hand, it’s great — you get the full skeleton most of the time, you get soft tissue preservation, including feathers. But it also means everything is crushed and deformed,” she said. “Not that our fossils have zero deformation, but overall most of the bones have really beautiful three-dimensional preservation, and just really, really great detail. We see places where muscles and tendons were attaching, all kinds of interesting stuff to anatomists.”

Once Hutchison prepared the fossils and placed them in the UC Museum of Paleontology collection, they drew the attention of a few budding and established paleontologists, but no one completed an analysis.

“The stuff is legendary. People in the vertebrate paleontology community have known about this thing forever and ever, and it just happened that everyone who was supposedly working on it got too busy and it fell by the wayside and just never happened,” Atterholt said. “I was honored and incredibly excited when Howard said that I could take on the project. I was over the moon.”

Her analysis showed that by the late Cretaceous, enantiornithines had evolved advanced adaptations for flying independent of today’s birds. In fact, they looked quite similar to modern birds: they were fully feathered and flew by flapping their wings like modern birds. The fossilized bird probably had teeth in the front of its beak and claws on its wings as well as feet. Some enantiornithines had prominent tail feathers that may have differed between male and female and been used for sexual display.

“It is quite likely that, if you saw one in real life and just glanced at it, you wouldn’t be able to distinguish it from a modern bird,” Atterholt said.

This fossil bird is also among the largest North American birds from the Cretaceous; most were the size of chickadees or crows.

“What is most exciting, however, are large patches on the forearm bones. These rough patches are quill knobs, and in modern birds they anchor the wing feathers to the skeleton to help strengthen them for active flight. This is the first discovery of quill knobs in any enantiornithine bird, which tells us that it was a very strong flier.”

Atterholt and her colleagues named the species Mirarce eatoni (meer-ark’-ee ee-tow’-nee). Mirarce combines the Latin word for wonderful, which pays homage to “the incredible, detailed, three-dimensional preservation of the fossil,” she said, with the mythical Greek character Arce, the winged messenger of the Titans. The species name honors Jeffrey Eaton, a paleontologist who for decades has worked on fossils from the Kaiparowits Formation. Eaton first enticed Hutchison to the area in search of turtles, and they were the first to report fossils from the area some 30 years ago.

Thousands of such fossils from the rocks of the Kaiparowits Formation, many of them dinosaurs, contributed to the establishment of the Grand Staircase-Escalante National Monument in 1996.

“This area contains one of the best Cretaceous fossil records in the entire world, underscoring the critical importance of protecting and preserving these parts of our natural heritage,” Atterholt said. “Reducing the size of the protected area puts some of our nation’s most valuable natural and scientific resources at risk.”

Hutchison’s field work was supported by the Annie M. Alexander endowment to the UCMP.