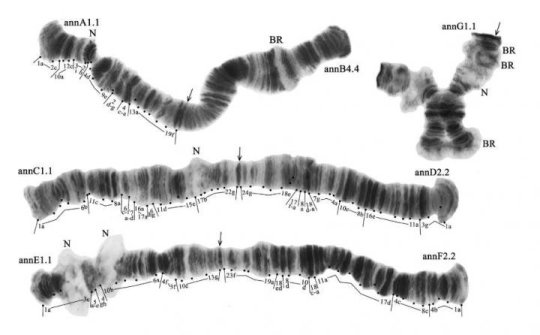 We know that the Caucasus is a relatively large mountainous region, situated between Black and the Caspian seas. In its turn, it is divided into three subregions: Ciscaucasia, Greater Caucasus and Transcaucasia, also known as South Caucasus.

A closer look into the chromosome structure of mosquito larvae of a curious group of species (Chironomus “annularius” sensu Strenzke (1959)), collected from the three localities, has allowed Dr Mukhamed Karmokov of the Tembotov Institute of Ecology of Mountain territories at the Russian Academy of Science to figure out how the specificity of the Caucasian region has simultaneously unified its fauna geographically, yet has divided it evolutionarily. His paper is published in the open access journal Comparative Cytogenetics.

Having collected a sufficient amount of mosquito larvae, the researcher managed to study the chromosome structure, rearrangements and possible peculiarities of the separate Caucasian populations, in order to compare them.

Additionally, he analysed their relations to earlier known populations from Europe, Siberia, Kazakhstan and North America.

Amongst the curious peculiarities Karmokov identified in the chromosome structure of the studied larvae were some rearrangements which appear unique to Caucasus. Furthermore, he found that despite the close geographic proximity, the genetic distance between the Caucasian populations is quite significant, even While not enough to determine them as separate species, it could prove them as separate subspecies.

In conclusion, the scientist notes that the obtained data confirm that the Caucasian populations of the studied species have complex genetic structure and provide evidence for microevolution processes in the region.