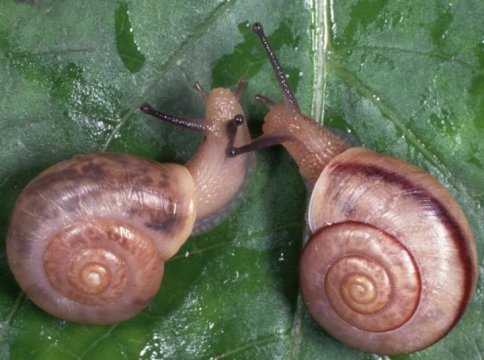 Snails, like humans, can be right-handed or left-handed and the swirl etched into the shell of a snail can reveal a lot about them, down to their genetic makeup.

Researchers from Shinshu University and the Okinawa Institute of Science and Technology Graduate University in Japan have found that the gene influencing the direction of the shell coil may also offer insight into the evolution of snails overall.

The scientists published their results on January 10, 2019, in Zoological Letters.

The shell swirl reflects the handedness of the snail’s internal organs. In humans, about one in 10,000 people have mirrored organs, with their heart more to the right than to the left. The flipped organs rarely result in symptoms for the person.

In some snail populations, the reversal resulted in the evolution of new species. In other cases, left-handedness — a shell whirl coiled counter-clockwise — might mean the snail never even reproduces.

“One of the mysteries of snail evolution is the frequent reversal of handedness of the body in several species,” said Takahiro Asami, a professor in the department of biology at Shinshu University in Japan and lead author on the paper. “The evolution of the process is a potential mechanism for producing new species in snails, with significant effects later in the life cycle. For example, the genital apparatus is located in the opposite side of body between right and left-handed snails so that mating between the two is impossible.”

Asami maintains a particular mutant strain of a land snail species, called Bradybaena similaris, in his lab. These snails have about a 50-50 chance of coiling left or right. Right-handed mothers in this strain lay both right-handed and left-handed eggs.

“The largest difference between the two was actually in the expression level of one gene, called diaph, but not in the gene itself” Asami said, noting that the gene is known to influence handedness in pond snails.

All of the snails have the gene. It’s whether the gene is fully expressed that determines the direction of handedness. Snails do not normally develop to be right-handed, unless diaph is expressed enough.

Asami and his team plan to study the genetic mechanisms of evolution of body handedness of snails, including mutations, in addition to their specific focus on the diaph gene.

Materials provided by Shinshu University. Note: Content may be edited for style and length.