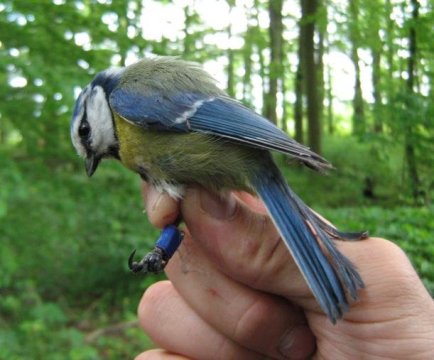 Heatwaves similar to those experienced in Europe in 2018 can have a very negative impact on animals. A new study from Lund University in Sweden shows that overheated birds have smaller offspring, and that those that are born may have lower chances of survival.

Researchers were already aware that animals living in very warm regions of the globe are less active during the hottest hours of the day. Now, biologists at Lund University have observed that warm weather and overheating are a problem even in Sweden. The study was conducted at Lake Krankesjön in Skåne.

“If we have more summers like this last one, many animal species are likely to be very negatively affected, as they cannot take optimal care of their offspring,” says Andreas Nord, researcher at the Department of Biology at Lund University.

In spring 2018, he and his colleague Jan-Åke Nilsson presented results showing that small birds can reach a body temperature of over 45 degrees Celsius when working hard. This exceeds their normal temperature by 4 degrees. Now the researchers have continued their investigation and can, for the first time, show that animals that are able to get rid of excess heat more easily have larger and more viable offspring, while their own body condition is not significantly impaired.

The study was conducted on Eurasian blue tits, one of Sweden’s most common birds in nest boxes and a species that produces very large broods. The number of offspring, commonly 15 per pair, is the reason why the parents are forced to bring food back to the nest box hundreds of times every day.

In order to make it easier for the birds to lower their body temperature, the researchers trimmed the feathers on the breast and abdomen of half the birds in the study (the intervention is harmless as new feathers grow in after a couple of weeks). The other half served as a control group. Both the trimmed and the untrimmed birds had small transmitters mounted on their legs to measure how often they flew in and out of their nest boxes.

The birds were subsequently left undisturbed until their offspring had reached their final size, and were then recaptured and weighed and had their body temperature measured. The researchers also checked the offspring to see how the parents’ varying ability to get rid of excess heat had affected their progeny.

The results showed that parents with trimmed feathers had a lower body temperature and weighed more than their untrimmed parents at the end of the breeding season. In addition, their offspring were larger and often heavier. The measurements also showed that parents who could more easily get rid of their excess heat did not use their energy on feeding their young more frequently than parents in the untrimmed control group.

“That surprised me, but now we believe they instead spent time and energy on carrying more food with them on every outing, or that they looked more intensively for particularly good food for their young. We will continue to investigate this,” explains Andreas Nord.

“It is important how large the offspring are just before they leave the nest. Their size tells us a great deal about their own chances of surviving and reproducing,” he concludes.