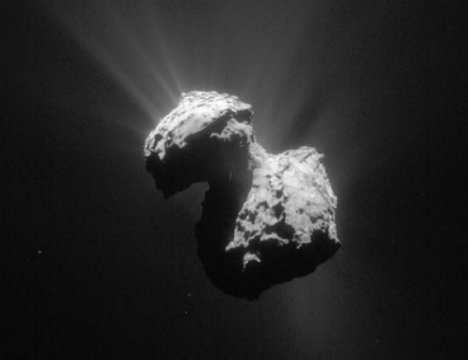 Scientists have found that molecular oxygen around comet 67P is not produced on its surface, as some suggested, but may be from its body.

The European Space Agency’s Rosetta spacecraft escorted comet 67P/Churyumov-Gerasimenko on its journey round the sun from August 2014 — September 2016, dropping a probe and eventually crashing onto its surface.

When the comet is close enough to the sun the ice on its surface ‘sublimes’ — transforms from solid to gas — forming a gas atmosphere called a coma. Analysis of the coma by instruments on Rosetta revealed that it contained not only water, carbon monoxide and carbon dioxide, as anticipated, but also molecular oxygen.

Molecular oxygen is two oxygen atoms joined together, and on Earth it is essential for life, where it is produced by photosynthesis. It has been previously detected around some of the icy moons of Jupiter, but it was not expected to be found around a comet.

The Rosetta science team originally reported that the oxygen was most likely from the comet’s main body, or nucleus. This meant it was ‘primordial’ — that it was already present when the comet itself formed at the beginning of the Solar System 4.6 billion years ago.

Now, members of the Rosetta team have analysed the data on 67P’s oxygen in light of the new theory. In a paper published today in Nature Communications and led by Imperial College London physicists, they report that the proposed mechanism for producing oxygen on the surface of the comet is not sufficient to explain the observed levels in the coma.

Lead author Mr Kevin Heritier, from the Department of Physics at Imperial, said: “The first detection of molecular oxygen in 67P’s coma was both very surprising and exciting.”

Co-author Dr Marina Galand, from the Department of Physics at Imperial and Science Co-Investigator of the Rosetta Plasma Consortium, added: “Surface generation of molecular oxygen may still happen on 67P, but the majority of the molecular oxygen in the coma is not produced through such a process.”

The new analysis is consistent with team’s original conclusion, that molecular oxygen is most likely primordial. Other theories have been proposed, and can’t yet be ruled out, but the primordial theory currently fits the data best.