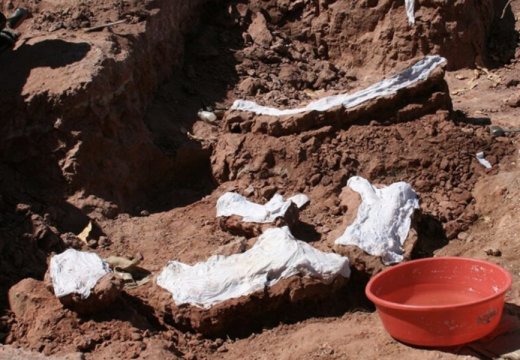 A new dinosaur that wears its “heart” on its tail provides new clues to how ecosystems evolved on the African continent during the Cretaceous period according to researchers at Ohio University.

The OHIO team identified and named the new species of dinosaur in an article published this week in PLOS ONE. The new dinosaur, the third now described from southwestern Tanzania by the NSF-funded team, is yet another member of the large, long-necked titanosaur sauropods. The partial skeleton was recovered from Cretaceous-age (~100 million years ago) rocks exposed in a cliff surface in the western branch of the great East African Rift System.

The new dinosaur is named Mnyamawamtuka moyowamkia (Mm-nya-ma-wah-mm-too-ka mm-oh-yo-wa-mm-key-ah), a name derived from Swahili for “animal of the Mtuka (with) a heart-shaped tail” in reference to the name of the riverbed (Mtuka) in which it was discovered and due to the unique shape of its tail bones.

The initial discovery of Mnyamawamtuka took place in 2004, when part of the skeleton was discovered high in a cliff wall overlooking the seasonally dry Mtuka riverbed, with annual excavations continuing through 2008. “Although titanosaurs became one of the most successful dinosaur groups before the infamous mass extinction capping the Age of Dinosaurs, their early evolutionary history remains obscure, and Mnyamawamtuka helps tell those beginnings, especially for their African-side of the story,” said lead author Dr. Eric Gorscak, a recent Ph.D. graduate of Ohio University, current research associate at the Field Museum of Natural History (Chicago) and new assistant professor at the Midwestern University in Downers Grove, just outside of Chicago. “The wealth of information from the skeleton indicates it was distantly related to other known African titanosaurs, except for some interesting similarities with another dinosaur, Malawisaurus, from just across the Tanzania-Malawi border,” noted Dr. Gorscak.

Titanosaurs are best known from Cretaceous-age rocks in South America, but other efforts by the team include new species discovered in Tanzania, Egypt, and other parts of the African continent that reveal a more complex picture of dinosaurian evolution on the planet. “The discovery of dinosaurs like Mnyamawamtuka and others we have recently discovered is like doing a four-dimensional connect the dots,” said Dr. Patrick O’Connor, professor of anatomy at Ohio University and Gorscak’s advisor during his Ph.D. research. “Each new discovery adds a bit more detail to the picture of what ecosystems on continental Africa were like during the Cretaceous, allowing us to assemble a more holistic view of biotic change in the past.”

The excavation process spanned multiple years, and included field teams suspended by ropes and large-scale mechanical excavators to recover one of the more complete specimens from this part of the sauropod dinosaur family tree. “Without the dedication of several field teams, including some whose members donned climbing gear for the early excavations, the skeleton would have eroded away into the river during quite intense wet seasons in this part of the East African Rift System,” added O’Connor.

“This latest discovery is yet another fine example of how Ohio University researchers work the world over in their pursuit of scientific research,” Ohio University President M. Duane Nellis said. “This team has turned out a number of notable discoveries which collectively contribute significantly to our understanding of the natural world.”

Mnyamawamtuka and the other Tanzanian titanosaurs are not the only animals discovered by the research team. Remains of bizarre relatives of early crocodiles, the oldest evidence for “insect farming,” and tantalizing clues about the early evolution of monkeys and apes have been discovered in recent years. Such findings from the East African Rift provide a crucial glimpse into ancient ecosystems of Africa and provide the impetus for future work elsewhere on the continent.

“This new dinosaur gives us important information about African fauna during a time of evolutionary change,” said Judy Skog, a program director in the National Science Foundation’s Division of Earth Sciences, which funded the research. “The discovery offers insights into paleogeography during the Cretaceous. It’s also timely information about an animal with heart-shaped tail bones during this week of Valentine’s Day.”

Recent findings by the research team in the Rukwa Rift Basin include:

“The Tanzanian story is far from over but we know enough to start asking what paleontological and geological similarities and dissimilarities there are with nearby rock units. Revisiting Malawi is my top priority to address these broader, regional questions,” said Gorscak, who also participates in ongoing projects in Egypt and Kenya. “With Mnyamawamtuka and other discoveries, I’m not sure to view it as writing or reading the next chapters in the paleontological book of Africa. I’m just excited to see where this story is going to take us.”

Materials provided by Ohio University. Note: Content may be edited for style and length.