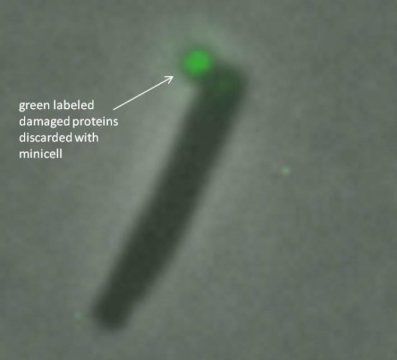 Scientists have known for decades that certain bacteria produce small spherical versions of themselves. Although they lack basic materials to reproduce or function like normal cells, recent interest in such “minicells” has spiked due to their proficiency as nano-sized delivery tools for drugs and vaccines to targeted cells and tissues.

Yet the natural role of minicells, which protrude like budding balloons off the ends of bacteria, has remained a mystery. Now, researchers at the University of California San Diego have demonstrated for the first time that minicells play a key function in the self-preservation of bacteria.

Publishing their results in the journal mSphere, the researchers discovered that E. coli bacteria discharge damaged proteins bundled inside minicells — a process not unlike a pod being launched from a spaceship — as a survival mechanism.

“It’s amazing that even bacteria take out their garbage,” said Camilla Rang, a research specialist in Division of Biological Sciences Professor Lin Chao’s laboratory and first author of the paper. “We have shown that minicells can be beneficial for the bacteria and help them escape death by kicking out the damaged proteins.”

To examine the link between minicells and the health of bacterial cells, the researchers tagged and tracked proteins with fluorescent markers. While under attack from antibiotics such as streptomycin, the researchers used microscopy techniques to follow damaged proteins in E. coli bacteria to the pole (end point) areas, then packaged inside the minicell and finally dispatched out of the bacteria.

“The advantage that minicells provide in the presence of streptomycin suggests that they could also play a role in helping bacterial cells resist, survive or persist when challenged with antibiotics,” the researchers note in the paper.

The new findings help provide mechanistic insights for researchers who have recently used minicells as molecular drug delivery systems for diseases such as cancer. In such treatments, minicells are loaded through diffusion with therapeutic drugs, tagged with antibodies for a target cancer and injected into the blood system. The new results help describe how natural routes within minicells could instead be used for packing drug payloads.

The paper is dedicated to the memory of Distinguished Professor Emeritus William Loomis, a 50-year UC San Diego faculty member, who provided critical input to the direction of the research project. He passed away in 2016. Coauthors of the paper include UC San Diego’s Audrey Proenca, Christen Buetz, Chao Shi and Lin Chao.