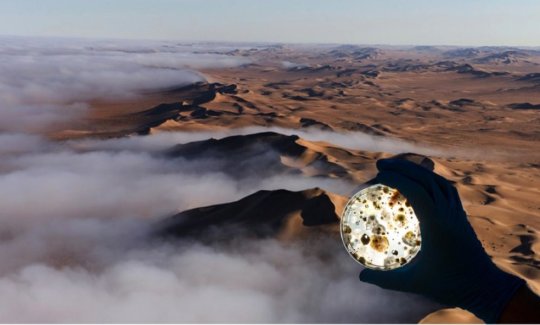 Fog can act as a vector for microbes, transferring them long distances and introducing them into new environments. So reports an analysis of the microbiology of coastal fog, recently published in the journal Science of the Total Environment.

Co-author Kathleen Weathers, a Senior Scientist at Cary Institute of Ecosystem Studies, explains, “Fog’s role in transporting water and nutrients to coastal areas is well documented. Far less is known about the biology of fog, including the communities of microbes that live in fog droplets, and how they travel between marine and terrestrial ecosystems.”

The research team tracked fungal and bacterial communities in fog delivered to two fog-dominated sites: Southport Island, Maine in the United States and the Namib Desert in Namibia. Their aim: to better understand how fog influences the transport of microbes from the Atlantic Ocean into these fog-fed terrestrial ecosystems.

Air was sampled in Maine and the Namib before and after rain, fog, and high wind events to detect changes in airborne microbial composition due to weather conditions. Ocean water — where coastal fog originates — was also sampled. At both sites, bacterial and fungal DNA was extracted from filters; trends within and between sites were then analyzed.

Microbes on the move

Co-lead author Sarah Evans of Michigan State’s Kellogg Biological Station explains, “Fog droplets were found to be an effective medium for microbial sustenance and transport. At both sites, microbial diversity was higher during and after foggy conditions when compared to clear conditions.”

Marine influences on fog communities were greatest near the coast, but still evident 50 kilometers inland in the Namib Desert. Fog in both Maine and the Namib contained microbes from both soil and ocean sources.

Moisture in fog allows microbes to persist longer than they would in dry aerosols. As a result, fog deposits a greater abundance and diversity of microbes onto the land than deposition by air alone.

Co-lead author M. Elias Dueker of Bard College explains: “When fog rolls in, it can shift the composition of terrestrial airborne microbial communities. And in a fascinating twist, on the journey from the ocean to the land, microbes not only survive, but change during transport. Fog itself is a novel, living ecosystem.”

The authors note the possible health implications of the marine-terrestrial fog connection. Fog at both sites contained pathogenic microbes, including suspected plant pathogens and species known to cause respiratory infections in immune-compromised people. This raises concern about the role that fog could play in transporting harmful microbes.

Dueker explains, “Bacterial and viral aerosols can originate from polluted waterways, such as those contaminated with sewage. When polluted water mixes with air, harmful substances become airborne and spread. These pathogens could also be incorporated in urban fog, increasing their threat to people, plants, and other animals.”

“We need a better understanding of fog’s role as a vector for microbes, with special attention to pathogens that threaten health,” Weathers explains. “Warming sea surface temperatures and altered wind regimes are likely to affect fog distribution in many coastal regions.”

The team identified the need for future studies that help predict which microbes are most likely to be transported and deposited by fog. Using traits like spore size and behavior, models could be developed that help forecast harmful fog.