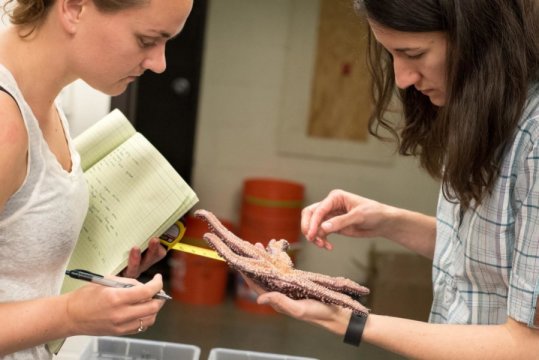 The culprit might be many microbes. Since 2013, a gruesome and mysterious disease has killed millions of sea stars along the West Coast from Mexico to Alaska — making the animals turn to goo, lose their legs, and pull their own bodies into pieces. For years, ocean scientists have searched in vain for the cause.

Now a first-of-its-kind research study shows that the animals’ microbiomes — the community of bacteria living in and on the sea stars — are critically important to the progression of the disease.

“An imbalance of microbes might be leading to the disease,” said Melissa Pespeni, a marine biologist at the University of Vermont, who co-led the new study published November 7 in Scientific Reports, an online journal from the publishers of Nature.

Or, it could be that the changes the scientists observed in the sea stars’ microbiomes were caused by another, as yet undetected, pathogen. “We were thinking we might find a smoking gun of one microbe but no, there’s a whole suite of known pathogens that increase in abundance with the onset of the disease,” Pespeni said.

These known disease-causing bacteria from the family Tenacibaculum, and other opportunistic bacteria, spiked in abundance at the beginning of the time the scientists observed the sea stars getting sick. And these same troublesome bacteria continued to increase as the diseased animals progressed toward death. At the same time, known beneficial bacteria, from the group Pseudoalteromonas, greatly decreased in abundance at the onset of the illness.

“We don’t yet know the cause of sea star wasting disease,” said Melanie Lloyd, who co-led the new study as a post-doctoral researcher in Pespeni’s UVM lab.

“But we do show that the microbiome plays a powerful role in whether a sea star stays healthy or becomes sick,” said Pespeni.

Together, the two scientists observed thirty-seven ochre sea stars (Pisaster ochraceus) collected from Monterey, California — a known hotspot of the disease — in thirty-seven tanks in Vermont. All the animals came into the lab looking healthy, but, over two weeks, twenty-nine of them developed the wasting disease and died.

“It’s really quite sad to see. They become limp and liquidy, with holes straight to their insides and no tissue integrity. If an arm starts walking in one direction, it’s likely to leave the rest of it’s body behind,” said Pespeni.

In contrast, the eight animals that didn’t get the disease had a higher overall richness of microbes than the sick ones. And, the UVM scientists show, the healthy animals hosted an abundance of helpful microbes that can detect disease-causing microbes, inhibit their growth, and clean up harmful substances that might damage the sea star — like environmental pollutants.

The wasting disease has attacked more than twenty different species of sea stars across a huge geographic range, threatening several of these top-level predators with extinction — and rewriting the ecology of the west coast of North America.

“The disease has crossed into multiple different genera of sea stars, and suddenly appeared in many far-apart places,” says Pespeni. “Because of the widespread nature of the disease, it seems increasingly less likely that it’s a single pathogen.”

Since the late nineteenth century, some scientists have assumed that the progression of infectious disease is the result of one organism attacking a host. This approach doesn’t shed much light on some complex diseases. For example, Black Band Disease in corals has been shown to be caused by a whole community of microbes. And, in humans, several chronic diseases, including inflammatory bowel disease, multiple sclerosis, and type 1 diabetes, have been linked to so-called “dysbiosis” — a general disruption of a person’s microbiome.

“Even if we find a single pathogen at the root of sea star wasting disease, it could be doing its work by throwing off the microbiome of the host,” Pespeni said. But she suspects the disease is the result of a multifaceted cascade of troubles affecting the animal’s microbiome and immune system — that, in turn, she speculates, may be triggered by pollution or environmental change, noting important areas for further research.

During this and other experiments, “it’s not uncommon at all to observe a sea star healthy one day and in pieces and near death the next morning,” said UVM co-author Melanie Lloyd. “If this disease was happening in humans, it would be the making of a Stephen King novel.”