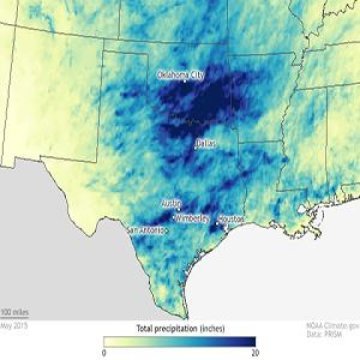 A University of Oklahoma meteorologist, Elinor R. Martin, expects severe drought and long-lasting rainfall events to worsen in the future. In Martin’s new study just published, she determines how frequent, intense and long lasting these types of events will be in the future. Martin looks at both severe drought and rain events, but it is the first time extended heavy rain events have been studied.

“In some places, there will be more frequent droughts, and other places can expect more frequent rainfall,” said Martin, professor in the School of Meteorology, OU College of Atmospheric and Geographic Sciences. “The Caribbean and Central America will have more extreme droughts and the north and northeast of North America can expect more extreme heavy rain events. Around the world, some places will see droughts and heavy rain events become more intense, longer lasting and more frequent. For the agriculture and related industries, this is particularly important.”

Globally, there are areas that will overall become wetter and areas that will become drier. When it gets warmer, the water builds up and it rains for long periods, but there will be longer periods between rain events and in places, it will become drier. Even regions that are projected to become drier overall, like the Southwest and South Central United States, are expected to see more severe, longer and frequent periods of heavy rain. Martin refers to the May 2015 rain event in Oklahoma and Texas as one example of what could be expected in the future.

“When it gets warmer, water vapor can build up in the atmosphere, so when it does rain it rains a lot and for long periods, but there will be longer periods between rain events so droughts will become worse.” said Martin. She points to a changing climate as the reason these events will worsen, and defines droughts and rain events by using a standardized rainfall index to compare events between regions and seasons. For this study, Martin used the same climate models as the Intergovernmental Panel on Climate Change.