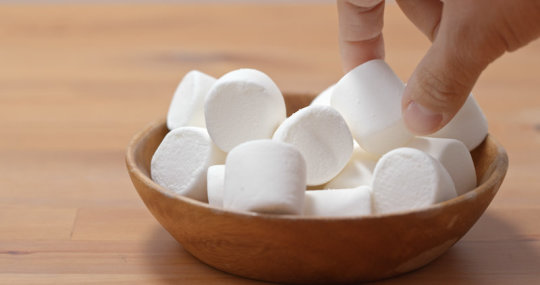 What factors affect how human touch perceives softness, like the feel of pressing your fingertip against a marshmallow, a piece of clay or a rubber ball? By exploring this question in detail, a team of engineers and psychologists at the University of California San Diego discovered clever tricks to design materials that replicate different levels of perceived softness.

The findings provide fundamental insights into designing tactile materials and haptic interfaces that can recreate realistic touch sensations, for applications such as electronic skin, prostheses and medical robotics. Researchers detail their findings in the Aug. 30 issue of Science Advances.

“We provide a formula to recreate a spectrum of softness. In doing so, we are helping close the gap in understanding what it takes to recreate some aspects of touch,” said Charles Dhong, who co-led the study as a postdoctoral fellow at UC San Diego and is now an assistant professor in biomedical engineering at the University of Delaware. Dhong worked with Darren Lipomi, a professor of nanoengineering at UC San Diego and the study’s co-corresponding author.

Based on the results from their experiments, the researchers created equations that can calculate how soft or hard a material will feel based on material thickness, Young’s modulus (a measure of a material’s stiffness), and micropatterned areas. The equations can also do the reverse and calculate, for example, how thick or micropatterned a material needs to be to feel a certain level of softness.

“What’s interesting about this is that we’ve found two new ways to tune the perceived softness of an object — micropatterning and changing the thickness,” Dhong said. “Young’s modulus is what scientists typically turn to in terms of what’s soft or hard. It is a factor, but now we show that it’s only one part of the equation.”

Dhong, Lipomi and colleagues were curious how indentation depth and contact area independently affect the perception of softness. To answer this question, they specially engineered materials that decoupled the two parameters and then tested them on human subjects.

The researchers created nine different elastomeric slabs, each with its own unique ratio of indentation depth to contact area. The slabs differed in amount of micropatterning on the surface, thickness and Young’s modulus.

Micropatterning is key to the design. It consists of arrays of raised microscopic pillars dotted on the surface of the slabs. These tiny pillars allow a fingertip to press deeper without changing the contact area. This is similar to pressing against the metal pins of a Pinscreen toy, where arrays of pins slide in and out to make a 3D impression.

“By creating these micropatterned surface structures, we produce discontinuous regions of contact where the finger presses in that are much smaller than the shadow it would cast on the surface,” Lipomi said.

The team tested the slabs on 15 subjects and instructed them to perform two tasks. In the first task, they presented subjects with multiple pairs of slabs and asked them to identify the softer one in each pair. In the second task, the researchers had subjects rank the nine slabs from softest to hardest.

Softness: a basic ingredient of touch

Experiments also led the researchers to an interesting conclusion: the perception of softness is a basic sensation, not a combination of other sensations.

“This means softness is a primary ingredient of the human sense of touch. It’s like how we have RGB for color displays,” Lipomi said. “If we can find the other ‘pixels of touch,’ can we combine them to make any tactile image we want? These are the fundamental things we would like to know going forward.”