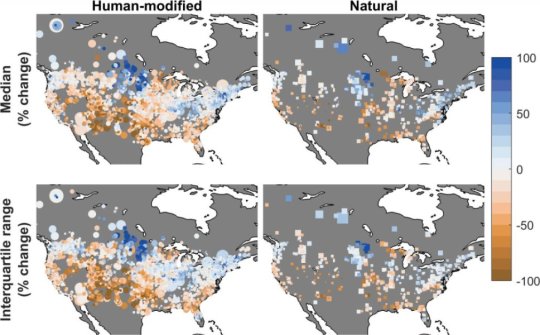 A new study led by researchers at Indiana University has found that modifications such as dams and reservoirs in the United States and Canada do not isolate rivers and streams from the effects of climate change.

The analysis published Aug. 6 in the Proceedings of the National Academy of Sciences shows that the flow of water in managed waterways has diminished in the southern and western United States over the past three decades in the same manner as waterways in these regions without modifications.

Similarly, the study also found that the flow of water in the rivers and stream of the northeastern United States, as well as in the northern Great Plains and southern prairies of Canada, has grown stronger over the past 30 years — the same as natural waterways in these regions.

“This study finds that large-scale climate trends are already affecting water availability in many regions of the southern and western United States,” said Darren Ficklin, an associate professor in the IU Bloomington College of Arts and Sciences Department of Geography and a member of the Environmental Resilience Institute at IU, a part of the university’s Prepared for Environmental Change Grand Challenge. “This is significant given the importance of streams and rivers for agricultural use, urban drinking water and aquatic ecosystems in these regions.”

The study is the first analysis to provide an in-depth look at the effect of climate change on managed waterways in the U.S. and Canada as compared to unmanaged streams and rivers. Traditional research on the effects of climate change on waterways focused on unmanaged — or “natural” — streams and rivers, as water-management techniques were thought to obscure “climate signals” in research.

To conduct the study, Ficklin and colleagues analyzed data on over 3,000 North American rivers and streams between 1981 and 2015 from the U.S. Geological Survey and the Canadian Department of the Environment. Of these waterways, 2,549 were considered managed resources. Only 570 waterways were considered natural — or about two out of every nine waterways in these countries.

A similar proportion of managed and natural waterways exists across the globe, Ficklin said. The ability to use these streams and rivers in climate research would open up many regions to observations about how changes in weather patterns, temperature and rainfall affect water access and supply.

“We believe that many, many more waterways could be used for climate research,” he added. “While certain characteristics like peak and low streamflow may still differ significantly, we find that the recent trends are quite similar.”

The study also sheds light on the relatively small impact that water management has on large-scale changes in climate trends.

“Generally, managed watersheds only mitigate the effects of climate change in extremely dry periods,” said study co-author Sarah Null of Utah State University. “For the other 99 percent of streamflows, these results suggest that current water management does not counteract the effects of climate change. This would require more innovative and strategic water management methods.”

The work doesn’t necessarily mean that the current water management methods are ineffective, Ficklin added. But it does suggest that the “signal” of climate change is apparent in typical flows across all waterways, no matter how they’re managed. After a certain point, he said, water management is simply unlikely to provide a solution to large-scale changes in water availability.

Prepared for Environmental Change, the second of Indiana University’s Grand Challenges initiatives, brings together a broad, bipartisan coalition of government, business, nonprofit and community leaders to help Indiana better prepare for the challenges that environmental change brings to our economy, health and livelihood.