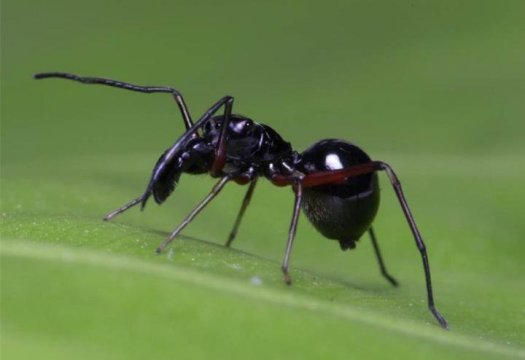 Lactation is the production and secretion of milk for the young and is a mammalian attribute. However, there have been few examples of milk provisioning in non-mammals.

In a study published in the journal Science on November 30, researchers at the Xishuangbanna Tropical Botanical Garden (XTBG) of the Chinese Academy of Sciences report milk provisioning in Toxeus magnus (Araneae: Salticidae), a jumping spider that mimics ants.

In a field study, researchers observed a jumping spider species whose breeding nest is composed of either several large individuals, with two or more adults, or one adult female and several juveniles.

“It’s a puzzling observation for a species assumed to be noncolonial. It’s possible that the jumping spider might provide either prolonged maternal care or delayed dispersal. We decided to test it,” said Dr. CHEN Zhanqi, the first author of the study.

The researchers assessed how offspring developed and behaved under maternal care both in laboratory conditions and in the field. No spiderlings were observed leaving the nest for foraging until they were 20 days old.

Milk provisioning in T. magnus involves a specialized organ over an extended period, similar to mammalian lactation. Observations under the microscope showed droplets leaking from the mother’s epigastric furrow where the spiderlings sucked milk.

The spiderlings ingest nutritious milk droplets secreted from the mother’s epigastric furrow until the subadult stage (around 40 days). If blocked from obtaining milk, the newly emerged spiders will stop development and die within 10 days, showing that milk is indispensable for offspring survival in the early stage.

Moreover, the researchers tested why parental care and milk provisioning were continued after 20 days when the spiderlings were able to forage for themselves.

The mother continued nest maintenance throughout, carrying out spiderlings’ exuviae and repairing nest damage. When receiving both maternal care and milk, 76% of the hatched offspring survived to adulthood (around 52 days).

Although the mother apparently treated all juveniles the same, only daughters were allowed to return to the breeding nest after sexual maturity. Adult sons were attacked if they tried to return. This may reduce inbreeding depression.

The findings show that in the jumping spider species, the mother invests much more than the male invests, predicting a female-biased sex ratio to be optimal for reproductive success with a polygamous mating system.

“Our findings demonstrate that mammal-like milk provisioning and parental care for sexually mature offspring have also evolved in invertebrates,” said Dr. CHEN. “We anticipate that our findings will encourage a reevaluation of the evolution of lactation and extended parental care and their occurrences across the animal kingdom.”

Materials provided by Chinese Academy of Sciences Headquarters. Note: Content may be edited for style and length.