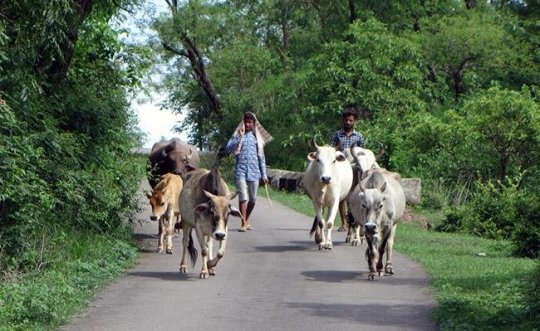 At the southern tip of the Himalayas, farmers in the Kangra region of India’s Himachal Pradesh graze cattle among rolling hills and forests. The forests, under management by the state or farmer cooperatives, are thriving. But a new University of Illinois study shows, unlike state-managed forests, farmer cooperatives directly benefit both forest health and farmers.

The finding itself may not be new — previous research and social-ecological theory suggest that land ownership leads to enhanced stewardship and improved environmental outcomes — but the study confirmed the conclusion in a new way, using machine learning.

“This is the first application of machine learning algorithms in natural resources policy and governance, evaluating how policies actually work on the ground,” says Pushpendra Rana, postdoctoral research associate in the Department of Natural Resources and Environmental Sciences at U of I and lead author on the study published in Environmental Research Letters.

Machine learning harnesses modern computing power to explore patterns in large datasets, an advantage over traditional policy impact evaluations. The efficacy of environmental policy is often tested empirically, with experimental “treatments” (areas with new policies in place) and “controls” (business as usual). Researchers physically measure outcomes like tree growth or soil health and make comparisons between treatments and controls. The work can yield accurate estimates of impact but is time consuming and provides only a single snapshot in time.

“Current impact evaluation approaches tend to look at results just once — at the conclusion of a project. We measured long-term vegetation growth trajectories, allowing us to understand on-the-ground change after different policies were implemented,” says Daniel Miller, Rana’s faculty mentor and co-author on the study. “It’s important to evaluate over the long term, especially in forestry because trees take a long time to grow.”

The researchers evaluated the efficacy of two forest revegetation policies, implemented in Kangra starting in 2002. Forest parcels were either planted and managed by farmer cooperatives, in which farmers had long-term rights to the property and could decide where to plant trees, or by the state, with less input from farmers.

When the machine-learning algorithm evaluated the entire region as a whole, it failed to identify differences between the two policies in terms of vegetation growth. Rana says traditional evaluation methods might have looked at that result and concluded the policies were interchangeable or unsuccessful.

“Traditional approaches usually look at the average treatment effect only, and they can’t explain any variation around the average,” he says. “Machine learning, along with social-ecological-systems theory, gives us the ability to unpack the context — in what contexts does this policy perform well or not as well?”

Rana knows something about the context. Having served more than 10 years with the Indian Forest Service, he explains that when the state was in control, they enclosed newly planted trees with fencing and restricted access to cattle. When the algorithm honed in on state-managed parcels, it found that the strategy worked, but tree growth was strictly a function of environmental factors in those cases — things like temperature and precipitation.

Conversely, the algorithm picked up factors related to people in explaining the success of forests managed by cooperatives — for example, the number of people in the area and how much grazing land they had access to.

“Stronger local institutions and secure tenure under cooperative management explain the difference in outcomes between the two policies,” Rana says. “In the case of cooperative forest management, we found that an increase in vegetation growth came with support for farmers’ existing livelihoods, like grazing. These are agrarian communities where people have small pieces of land, 5-10 hectares, and they depend on forests for multiple needs.”

Given the new method confirmed widely accepted previous findings and used publicly available data, the researchers believe it could be deployed as a tool for environmental policy evaluation anywhere in the world.

“Forests are really important for developing a range of social and environmental benefits, including climate change mitigation, giving people jobs, and more,” Miller says. “We invest a lot in them. Those investments are translated into policies, but we don’t always know if those policies work or not. This study shows we can evaluate the effectiveness of natural resource policies in a new and powerful way.”