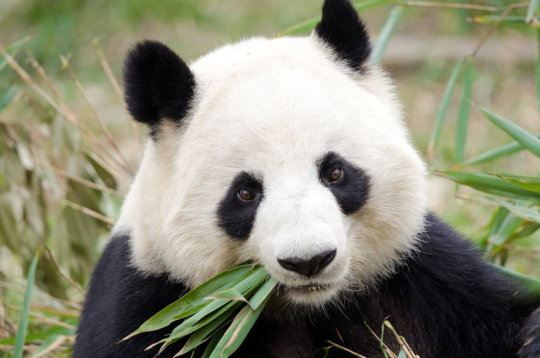 Conservationists often work to save species without having long-term population data. That can present major challenges for the science of saving species, as this kind of information is critical for making informed conservation policy and management decisions. In a recently published study in the journal Conservation Letters, a team of scientists reports results of a large-scale study examining giant panda habitat use trends and changing threats to their survival. This benchmark study is based on nearly 70,000 person-hours of survey work by China’s State Forestry Administration throughout the panda’s range in Sichuan, covering three-quarters of the entire species range.

“A data set like this is a dream come true,” said Ron Swaisgood, Ph.D., director of Recovery Ecology at the San Diego Zoo Institute for Conservation Research, San Diego Zoo Global, who is one of the study’s senior authors. “We have new insights into the ecological processes behind the recent decision by the International Union for Conservation of Nature (IUCN) to downlist the panda from Endangered to Vulnerable. There is plenty of good news here for pandas, but we must also point out that these gains are being offset by some emerging new threats. The take-home message is that pandas are doing better, but we still have work to do.”

The study, conducted from 1999 to 2003 and 2011 to 2014, comprehensively outlines the situation facing giant pandas in forests in China. Good news is found in the observation that pandas, which typically prefer more mature, intact forests, are using younger secondary forests more than they had previously — suggesting that protection measures put in place are allowing these forests to recover and become more suitable for pandas.

“With data collected from more than 50,000 plots in panda habitat, these data presented many challenges for analysis,” said Wei Wei, a scientist at China West Normal University and visiting scientist at San Diego Zoo Global. “But some of the findings are surprising, and will help managers and policymakers make good decisions for panda conservation.”

Logging is also much less common in panda habitat than it once was. But there are some worrisome findings as well, such as an increase in the presence of livestock and other human disturbance in panda habitat. These disturbances may be the cause of a modest upward migration by pandas to higher elevations.

“I’ve been working with giant pandas for about 20 years, and this is one of the most important studies I have participated in,” said Zejun Zhang, dean of Life Sciences at China West Normal University and senior author of the study. “It shows how important a commitment to large-scale, long-term data can be for conservation and sets a good example for how to approach conservation science for other endangered species.”

Conservationists indicate that this study can be a model for similar kinds of surveys for other species recovery programs.

“This study illustrates what species recovery can look like,” said Megan Owen, Ph.D., director of Population Sustainability at the San Diego Zoo Institute for Conservation Research, San Diego Zoo Global. “The giant panda population is growing, and pandas are being found in higher numbers than anticipated, in recovering habitat. However, the nature and intensity of human activities in these areas is also changing, and continued protections and adaptive management will be necessary to ensure the positive trends are maintained into the future.”

The study was conducted by a collaborative team of scientists from China West Normal University, Sichuan Forestry Bureau, the Chinese Academy of Sciences and San Diego Zoo Global.

Materials provided by San Diego Zoo Global. Note: Content may be edited for style and length.