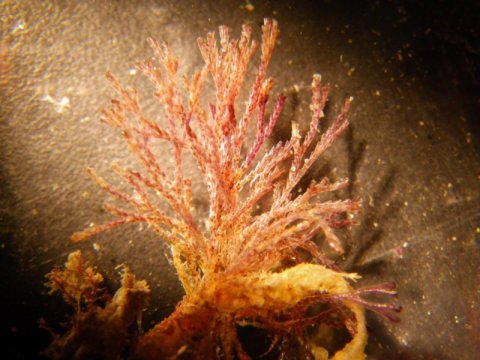 Alaska has a near-pristine marine ecosystem — it has fewer invasive species in its waters than almost any other state in the U.S. But that could be changing. With help from local volunteers, biologists at the Smithsonian Environmental Research Center (SERC) and Temple University have reported a new invasive species in the Ketchikan region, the invertebrate filter-feeder Bugula neritina, and documented the continuing spread of three other non-native species.

Ketchikan, a town of about 8,000 people on the southern tip of Alaska, is a gateway to more remote Alaskan waters in the north. It sits fewer than 100 nautical miles from British Columbia, so invasive species travelling from southern ports are likely to appear in Ketchikan first. But detecting marine invasive species is a constant challenge, even in a single harbor. By collaborating with citizen scientists from Ketchikan, Smithsonian researchers were able to document these new invasive species hopefully as soon as they arrived.

“It’s really important to know when new non-native species show up. They may be tiny invertebrates, but they can create big problems,” said lead author Laura Jurgens, who was a SERC postdoc at the time of the study. “Early detection means you have a better chance of controlling them before the populations get established. In other places, like California, Oregon and Washington, these organisms have displaced local marine animals or had economic impacts by fouling boats, fishing or aquaculture gear.”

The research focused on invasive “fouling organisms,” animals that live their lives glued to hard surfaces, filtering food from the water. To find the species, the scientists hung hard plastic squares from local docks and waited to see what grew on them. Between visits from the researchers, citizen scientists tended the squares, corresponding with SERC scientists to identify the animals growing there.

The new invader, B. neritina, is what is called a branching bryozoan. Like coral, bryozoans are colonies of tiny animals that together resemble undersea lichen, and are sometimes referred to as moss animals or sea lace. B. neritina had been observed all across California, but never as far north as Alaska.

“It’s a really obvious bryozoan species,” said Jurgens. “It’s the only purple thing in a forest of brown. So when you see it, you kind of gasp.”

The other species found in the study are tunicates, leathery invertebrates that are prolific in southern waters. Two of these tunicate species, the golden star and chain tunicates, seem to be spreading in Ketchikan.

The discoveries, published Sept. 27 in BioInvasions Records, are the culmination of years of observation by scientists from the Smithsonian, Temple University and the University of Alaska Fairbanks, as well as local citizen scientists. The project was hosted locally by the University of Southeast Alaska. In 2003, a group of scientists from SERC conducted an initial survey of Ketchikan, and noticed the chain tunicate, native to the western Pacific. In 2007, SERC established a citizen-science monitoring program called Plate Watch. Local citizen scientists — including a teacher and students from a nearby high school — have documented the chain tunicate’s spread ever since.

One of these citizen scientists was the first to notice the arrival of the golden star tunicate in Ketchikan waters in 2010. When scientists returned to Alaska in 2016, they found that the golden star and chain tunicates had become much more abundant than a decade earlier. They also noted the arrival of Bugula neritina, and the appearance of another tunicate, the solitary sea squirt Ciona savignyi, not seen in Alaska since 1903.

“One of the great things about this was that citizen scientists originally found the star tunicate,” said Jurgens. “We were then able to complement their work with intensive surveys for rare species.”

If these species become established in Ketchikan, scientists worry they could rapidly spread to other Alaskan waters. Since they spread largely by boat traffic, Ketchikan harbor, a hub for ships travelling north, could be a launching site for more invasions. Ketchikan is the first stop in Alaska for many cruise lines. Invasive species in its harbors will likely hitch rides further north, disturbing remote ecosystems.

“There are four or five cruise ships here every day in the summer,” said Gary Freitag, a coauthor of the study from the University of Alaska Fairbanks. “It doubles the town’s population.”

The scientists do not think there is a particular reason the species are arriving now. It is an inevitability in a region with heavy boat traffic. “There’s always been a lot of potential for invasive species to show up,” Freitag said. Climate change might also speed up the process: Warming means new arrivals are more likely to survive in once-cold waters. And as Arctic ice melts, more ship traffic will head north to take advantage of an open Arctic Passage.

That makes it even more important to keep an eye on Ketchikan, said Jurgens. Observing invasive species in real time helps scientists understand how invaders spread and establish themselves. “If we know when they arrive, it also helps us study what factors, like climate warming and human activities, might exacerbate their spread, so we can better predict when and where they might show up next,” she said.

The next step, according to SERC scientist Linda McCann, is to extend the reach of the citizen science network.

“Education and prevention go together,” said McCann, who also acts as regional coordinator for Plate Watch. “We can’t be everywhere, and it’s incredibly valuable to have local eyes on the ground. It’s much more likely that management works if we detect invasive species early.”