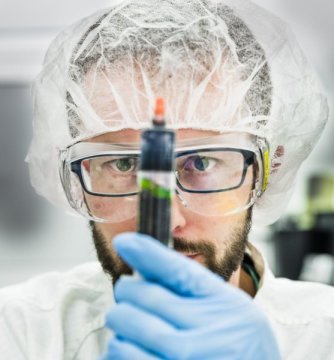 Adding bacteria to electrochemical systems is often an environmentally sensitive means to convert chemical energy to electricity. Applications include water purification, bioelectronics, biosensors, and for the harvesting and storage of energy in fuel cells. One problem that miniaturisation of the processes has encountered is that a high signal strength requires large electrodes and a large volume of liquid.

Researchers at Linköping University, together with colleagues at the Lawrence Berkeley National Laboratory in Berkeley, California, USA, have now developed a method in which they embed the electroactive bacterium Shewanella oneidensis into PEDOT:PSS, an electrically conducting polymer, on a substrate of carbon felt.

The researchers call the result a “multilayer conductive bacterial-composite film,” abbreviated as MCBF. Microscopic analysis of the film shows an interleaved structure of bacteria and conducting polymers that can be up to 80 ?m thick, much thicker than it can be without this specific technique.

“Our experiments show that more than 90% of the bacteria are viable, and that the MCBF increases the flow of electrons in the external circuit. When our film is used as anode in microbial electrochemical cells, the current is 20 times higher than it is when using unmodified anodes, and remains so for at least several days,” says Gábor Méhes, researcher at Linköping University and one of the lead authors of the scientific article recently published in Scientific Reports.

Previous work has tested, among other things, carbon nanotubes to increase the surface area at the anode, but the results were poor.

The possibility to couple biological processes with readable electrical signals is also valuable, for example for environmental sensors which require rapid response times, low energy consumption, and the ability to use many different receptors. Researchers have recently demonstrated how to use Shewanella oneidensis to produce electrical currents in response to arsenic, arabinose (a type of sugar) and organic acids, among others.

“This technology represents a type of “living electrode” where the electrode material and the bacteria are amalgamated into a single electronic biofilm. As we discover more about the essential role that bacteria play in our own health and wellness, such living electrodes will likely become versatile and adaptable tools for developing new forms of bioelectronic technologies and therapies,” says Daniel Simon, principal investigator in Organic Bioelectronics at the Laboratory of Organic Electronics.