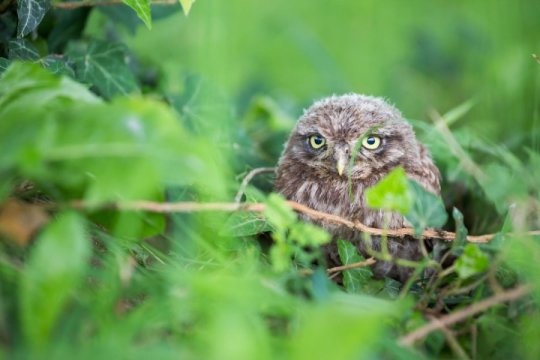 The little owl, Athene noctua, is a small nocturnal owl and is classified as an endangered species on the German Red List. In recent years the existing population of little owls has successfully been stabilized in the south-west of Germany, and in some places numbers are even rising. In neighboring northern Switzerland on the other hand there is still no established population of little owls, even though habitat conditions seem suitable for the species. Now, a team of researchers headed by Severin Hauenstein from the Department of Biometry and Environmental Systems Analysis at the University of Freiburg has researched whether juvenile little owls from Germany could reach and re-colonize northern Switzerland. The scientists have published their results in the peer-reviewed journal Ecological Applications.

“It is difficult to predict how animals will disperse,” says Hauenstein. To explore the dispersal potential of little owls, he and his colleagues from the Swiss Ornithological Institute in Sempach, Switzerland, the German Centre for Integrative Biodiversity Research Halle-Jena-Leipzig (iDiv), the Helmholtz Centre for Environmental Research in Leipzig and the University of Regensburg have developed an individual-based computer model. Using simulations, the researchers are able to assess whether individuals from the currently expanding little owl populations in south-western Germany are able to migrate to suitable habitats in northern Switzerland. Intensive farming and a steady loss of habitat has caused virtual extinction of the little owl in Switzerland.

The movement-behavior parameters in the model were estimated using Bayesian statistical inference based on radio telemetry data of juvenile little owls. Amongst other things, the researchers were able to show plausible inter-individual and -sexual behavioral differences — female juvenile little owls tend to move more directionally and fly longer distances during the dispersal phase, while their male counterparts are characterized by a tendency to take longer rests, and show a greater attachment to suitable habitat.

Hauenstein explains that the findings indicate that the little owl’s natural re-colonization of northern Switzerland is generally possible, however there are restrictions, “Fragmented urban areas in particular, such as those around the tri-border area near Basel, appear to limit the movement of juvenile little owls drastically. Besides that, little owls avoid forested areas because that is where their natural enemy, the tawny owl, can be found; they also avoid higher altitudes such as the Swiss Jura, the Black Forest and the Swabian Alb.” In the study, the scientists highlight existing but narrow dispersal corridors, for example the lower Aare valley or the Fricktal south-east of Basel. By improving the habitat for the birds there, e.g. by agricultural extensification and nest box provision, it may be possible to expedite the re-colonization of northern Switzerland by the little owl.