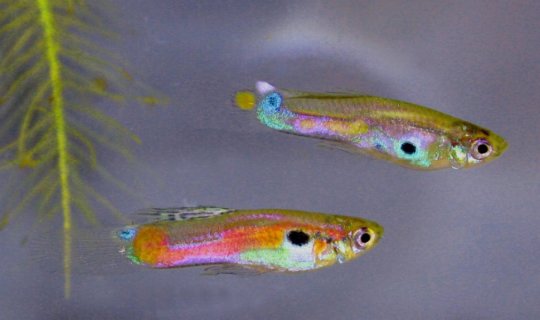 Artificial light at night also makes guppies more courageous during the day, according to a behavioural study led by researchers from the Leibniz-Institute of Freshwater Ecology and Inland Fisheries (IGB) and the Max Planck Institute for Human Development. Exposing fish to artificial light at night, not only made fish more active during the night, but also made them emerge quicker from hiding places during the day, which could increase their exposure to predators. Nocturnal lighting, however, did not affect their swimming speed or social behaviour during the day.

In this study, a team led by Ralf Kurvers of the MPI for Human Development in collaboration with the IGB, tested how exposure to artificial light at night affected the behaviour of fish during the day. As study species, they used guppies, a tropical freshwater fish and one of the model organisms of animal behavioural science. The scientists studied three groups of animals. Each group was exposed to the same bright light conditions during the day, but to different illuminations during the night. The first group experienced complete darkness at night; the second group was kept at a low light level at night, comparable to nocturnal illuminance under a street lamp; and the third group experienced bright light at night. After ten weeks of exposure, the scientists conducted behavioural tests to study the consequences of nightly light exposure on daytime behaviours.

The results: Fish left their hiding places faster during the day and swam more often in the riskier, open areas of the aquarium when exposed to strong, but also weak, artificial light at night. The light exposed fish thus increased their willingness to take risks. “The consequences of this increased risk taking behaviour are difficult to predict, but it is possible that they could be more at risk of predation by birds or other fish” says IGB researcher David Bierbach, co-author of the study. The light exposed fish did not differ in swimming speed and sociality, as compared to the control fish. “We suspect that the nocturnal light causes a stress response in the fish, and fish generally increase their risk taking when experiencing stress,” explains Ralf Kurvers, lead author of the study. Also in humans, a disruption of the night can cause a stress response. For example, firefighters who slept fewer hours during the night had elevated levels of the stress hormone cortisol.