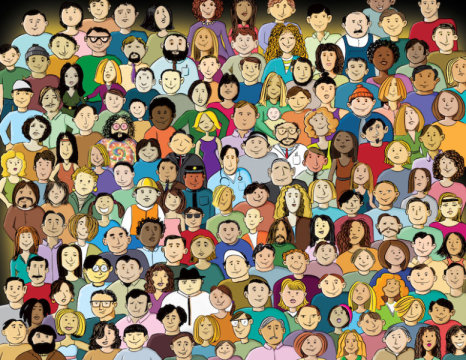 You often hear it framed in a comic sense, though it’s a form of stereotyping, and even prejudice. “You all look alike to me.”

To one race, the tired adage implies, people in other races are tough to differentiate from each other. Some call it the “other-race effect.”

It’s something more than a wince-worthy punchline. New UC Riverside research bears it out, finding we are hard-wired to process — or not process — facial differences based on race. And that process occurs in the earliest filters of our thought process.

The research, published this week in the journal Proceedings of the National Academy of Sciences of the United States, or PNAS, was led by UC Riverside psychologist Brent Hughes. The overriding question posited in the paper: When we observe members of another racial group, are their actual physical distinctions blurred in our mind’s eye?

READ  Research: Cuisine of early farmers revealed by analysis of proteins in pottery from Çatalhöyük --

The study participants were 17 white people studying white and black faces on a monitor while lying inside a functional MRI scanner, which identifies changes in brain activity. Some experiments were also conducted outside of the MRI.

Their findings affirmed previous studies, determining that participants showed a greater tendency to individuate — recognize differences in — own-race faces, and less for other races. But Hughes’ study went further, demonstrating how deep this tendency runs: as far as our earliest sensory processes.

“Our results suggest that biases for other-race faces emerge at some of the earliest stages of sensory perception,” Hughes wrote in the paper, entitled “Neural Adaptation to faces reveals racial outgroup homogeneity effects in early perception.”

Hughes wrote that the fallout from noticing the differences in members of one own’s race but not others is profound. These early perceptions can cascade, affecting downstream beliefs and behaviors. The implications can range from embarrassing to life-changing — think of when the wrong suspect in a crime is selected from a lineup.

“We are much more likely to generalize negative experiences if we see individuals as similar or interchangeable parts of a broad social group,” Hughes said.

Previous studies have found the “other-race effect” is found in populations other than whites. But Hughes isn’t comfortable extending his findings to assume that black people also “de-individuate” white faces in the high-visual visual cortex. The reason: Majority vs. minority perceptions.

The study shouldn’t be interpreted as a pass for “you all look the same to me,” Hughes said.

“These effects are not uncontrollable,” he said. “These race biases in perception are malleable and subject to individual motivations and goals. In this sense, attitudes, motives and goals can be shaping visual perceptual processes.”