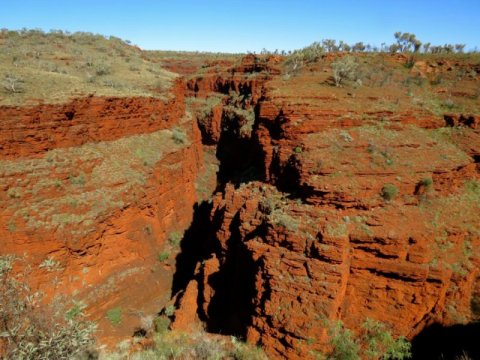 More than an eon ago, the sun shone dimmer than it does today, but the Earth stayed warm due to a strong greenhouse gas effect, geoscience theory holds. Astronomer Carl Sagan coined this “the Faint Young Sun Paradox,” and for decades, researchers have searched for the right balance of atmospheric gases that could have kept early Earth cozy.

A new study led by the Georgia Institute of Technology suggests that nitrous oxide, known for its use as the dental sedative laughing gas, may have played a significant role.

The research team carried out experiments and atmospheric computer modeling that in detail substantiated an existing hypothesis about the presence of nitrous oxide (N2O), a powerful greenhouse gas, in the ancient atmosphere. Established research has already pointed to high levels of carbon dioxide and methane, but they may not have been plentiful enough to sufficiently keep the globe warm without the help of N2O.

The study focused on the middle of the Proterozoic Eon, over a billion years ago. The proliferation of complex life was still a few hundred million years out, and the pace of our planet’s evolution probably appeared deceptively slow.

“People in our field often refer to this middle chapter in Earth’s history roughly 1.8 to 0.8 billion years ago as the ‘boring billion’ because we classically think of it as a very stable period,” said Stanton, the study’s first author. “But there were many important processes affecting ocean and atmospheric chemistry during this time.”

“The ocean chemistry was completely different back then,” said Glass, the study’s principal investigator. “Today’s oceans are well-oxygenated, so iron rapidly rusts and drops out of solution. Oxygen was low in Proterozoic oceans, so they were filled with ferrous iron, which is highly reactive.”

In lab experiments, Stanton found that Fe2+ in seawater reacts rapidly with nitrogen molecules, especially nitric oxide, to yield nitrous oxide in a process called chemodenitrification. This nitrous oxide (N2O) can then bubble up into the atmosphere.

When Stanton plugged the higher fluxes of nitrous oxide into the atmospheric model, the results showed that nitrous oxide could have reached ten times today’s levels if mid-Proterozoic oxygen concentrations were 10 percent of those today. This higher nitrous oxide would have provided an extra boost of global warming under the Faint Young Sun.

Nitrous oxide could have also been what some ancient life breathed.

Even today, some microbes can breathe nitrous oxide when oxygen is low. There are many similarities between the enzymes that microbes use to breathe nitric and nitrous oxides and enzymes used to breathe oxygen. Previous studies have suggested that the latter evolved from the former two.

The Georgia Tech model provides a plentiful source of nitrous oxide in ancient iron-rich seas for this evolutionary scenario. And prior to the Proterozoic, when oxygen was extremely low, early aquatic microbes could have already been breathing nitrous oxide.

“It’s quite possible that life was breathing laughing gas long before it began breathing oxygen,” Glass said. “Chemodenitrification might have supplied microbes with a steady source of it.”

The paper was co-authored by Chris Reinhard of Georgia Tech, James Kasting of the Pennsylvania State University, Nathaniel Ostrom and Joshua Haslun of Michigan State University, and Timothy Lyons of the University of California Riverside. The research was funded by grant NNA15BB03A from the NASA Astrobiology Institute. Findings, opinions, and conclusions are those of the authors and not necessarily of the NASA Astrobiology Program.

Materials provided by Georgia Institute of Technology. Note: Content may be edited for style and length.