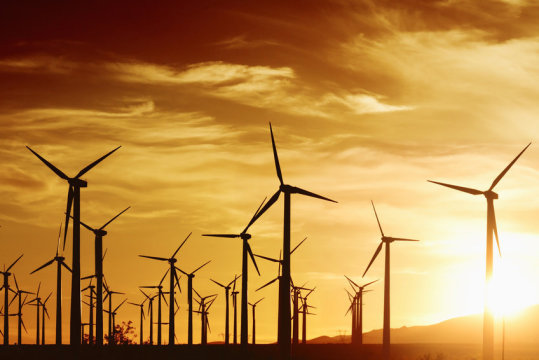 All large-scale energy systems have environmental impacts, and the ability to compare the impacts of renewable energy sources is an important step in planning a future without coal or gas power. Extracting energy from the wind causes climatic impacts that are small compared to current projections of 21st century warming, but large compared to the effect of reducing US electricity emissions to zero with solar. Research publishing in the journal Joule on October 4 reports the most accurate modelling yet of how increasing wind power would affect climate, finding that large-scale wind power generation would warm the Continental United States 0.24 degrees Celsius because wind turbines redistribute heat in the atmosphere.

“Wind beats coal by any environmental measure, but that doesn’t mean that its impacts are negligible,” says senior author David Keith, an engineering and public policy professor at Harvard University. “We must quickly transition away from fossil fuels to stop carbon emissions. In doing so, we must make choices between various low-carbon technologies, all of which have some social and environmental impacts.”

“Wind turbines generate electricity but also alter the atmospheric flow,” says first author Lee Miller. “Those effects redistribute heat and moisture in the atmosphere, which impacts climate. We attempted to model these effects on a continental scale.”

To compare the impacts of wind and solar, Keith and Miller started by establishing a baseline for the 2012-2014 US climate using a standard weather forecasting model. Then they added in the effect on the atmosphere of covering one third of the Continental US with enough wind turbines to meet present-day US electricity demand. This is a relevant scenario if wind power plays a major role in decarbonizing the energy system in the latter half of this century. This scenario would warm the surface temperature of the Continental US by 0.24 degrees Celsius.

Their analysis focused on the comparison of climate impacts and benefits. They found that it would take about a century to offset that effect with wind-related reductions in greenhouse gas concentrations. This timescale was roughly independent of the specific choice of total wind power generation in their scenarios.

More than ten previous studies have now observed local warming caused by US wind farms. Keith and Miller compared their simulated warming to observations and found rough consistency between the observations and model.

“In terms of temperature difference per unit of energy generation, solar power has about 10 times less impact than wind,” says Miller. “But there are other considerations. For example, solar farms are dense, whereas the land between wind turbines can be co-utilized for agriculture.” The density of wind turbines and the time of day during which they operate can also influence the climatic impacts.

Keith and Miller’s simulations do not consider any impacts on global-scale meteorology, so it remains somewhat uncertain how such a deployment of wind power may affect the climate in other countries.

“The work should not be seen as a fundamental critique of wind power. Some of wind’s climate impacts may be beneficial. So rather, the work should be seen as a first step in getting more serious about assessing these impacts,” says Keith. “Our hope is that our study, combined with the recent direct observations, marks a turning point where wind power’s climatic impacts begin to receive serious consideration in strategic decisions about decarbonizing the energy system.”