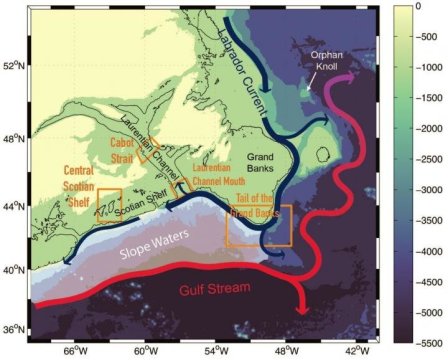 The Gulf of St. Lawrence has warmed and lost oxygen faster than almost anywhere else in the global oceans. The broad, biologically rich waterway in Eastern Canada drains North America’s Great Lakes and is popular with fishing boats, whales and tourists.

A new study led by the University of Washington looks at the causes of this rapid deoxygenation and links it to two of the ocean’s most powerful currents: the Gulf Stream and the Labrador Current. The study, published Sept. 17 in Nature Climate Change, explains how large-scale climate change already is causing oxygen levels to drop in the deeper parts of this waterway.

“The area south of Newfoundland is one of the best-sampled regions in the ocean,” said first author Mariona Claret, a research associate at the UW’s Joint Institute for the Study of the Atmosphere and Ocean. “It’s also a very interesting area because it’s at the crossroads where two big, larger-scale currents interact.”

Canada’s fisheries agency has tracked rising salinity and temperature in the St. Lawrence region since 1920. Oxygen has only been monitored since 1960, and the declining trend is causing concern.

Oxygen declines have been seen to affect Atlantic wolffish, Claret said, and threaten Atlantic cod, snow crabs and Greenland halibut that all live in the depths.

“The oxygen decline in this region was already reported, but what was not explored before was the underlying cause,” said Claret, who did the work while at Canada’s McGill University.

The research confirms a recent study showing that, as carbon dioxide levels rose over the past century due to human emissions, the Gulf Stream has shifted northward and the Labrador Current has weakened. The new paper finds that this causes more of the Gulf Stream’s warm, salty and oxygen-poor water to enter the St. Lawrence Seaway.

With this precision, eddies and details of the coastline that can influence ocean circulation begin to appear. Model output combined with the historical observations show that as the carbon dioxide levels go up, Gulf Stream water replaces Labrador Sea water in the deeper parts of the St. Lawrence gulf.

The waters carried by the Labrador Current have been churned up by storms in the Labrador Sea, and so air absorbed at the surface is mixed far below the surface. The Gulf Stream, however, is more stratified in stable horizontal layers; the top layer contains oxygen from the air above, but lower layers’ oxygen has been consumed by marine life. What’s more, the warmer Gulf Stream is equally dense at a greater depth, so deeper, more oxygen-deprived layers from the Gulf Stream follow the same density pathway taken by oxygen-rich near-surface water from the Labrador Current.

“We relate a change in oxygen on the coast to a change in large-scale currents in the open ocean,” Claret said.

In the model, the shift in the large-scale ocean circulation causing warming and deoxygenation in the Gulf of Saint Lawrence also corresponds with a decline in the Atlantic Meridional Overturning Circulation, an ocean circulation pattern known to strongly influence Northern Hemisphere climate.

“Being able to potentially link the coastal changes with the Atlantic Meridional Overturning Current is pretty exciting,” Claret added.

Analysis shows that half the drop in oxygen observed deep in the St. Lawrence River is just due to the warmer water, which can’t hold as much oxygen. The other half is likely due to other factors, such as biological activity in the two currents and inside the channel. What will happen next is unknown, Claret said. The oxygen levels in the St. Lawrence will depend on much larger questions, she said, like how much carbon dioxide humans will emit into the atmosphere in the coming decades, and how large-scale ocean currents will respond.

The research was funded by the European Research Council, the Spanish Ministry of Economy and Competitiveness, the Canada Foundation for Innovation and NOAA. Co-authors are Eric Galbraith at the Autonomous University of Barcelona; Jaime Palter at the University of Rhode Island; Daniele Bianchi at the University of California, Los Angeles; Katja Fennel at Dalhousie University in Nova Scotia; Denis Gilbert at Fisheries and Oceans Canada; and John Dunne at NOAA’s Geophysical Fluid Dynamics Laboratory.