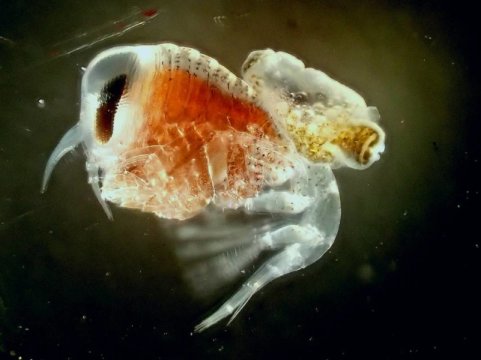 Pteropods or sea snails, also called sea angels, produce chemical deterrents to ward off predators, and some species of amphipods take advantage of this by carrying pteropods piggyback to gain protection from their voracious predators. There is no recognisable benefit for the pteropod. On the contrary they starve: captured between the amphipod’s legs they are unable to feed. Biologists working with Dr Charlotte Havermans at the Alfred Wegener Institute have investigated this phenomenon as part of a cooperation project with the University of Bremen. In an article in the journal Marine Biodiversity, they talk about kidnapping and explain the potential advantages of this association for both the host and its passenger.

Amphipods of the suborder Hyperiidea are popular prey for fish and sea birds. They play an important role in the Southern Ocean food web, which is why biologist Dr Charlotte Havermans is investigating the distribution, abundance and ecological role of various species of amphipods. To do so, she is taking samples on board the Research Vessel Polarstern from the Alfred Wegener Institute Helmholtz Centre for Polar and Marine Research (AWI). She works at the University of Bremen’s working group Marine Zoology. The project is funded by the DFG (German Research Foundation) in the Priority Programme on Antarctic Research.

During a Polarstern expedition that took place in the austral summer from 2016 to February 2017, she made an extraordinary discovery: “A few of the amphipods carried something unusual on their backs. On closer inspection I realised that they were carrying pteropods piggyback,” reports the biologist. A literature search revealed that US researchers had already described this behaviour back in 1990 — although only for the high-Antarctic coastal waters and not for the open Southern Ocean where the ship was underway.

“We were wondering whether these tandems occur as frequently in the open ocean as in coastal waters — and whether both animals benefit from the relationship,” explains Charlotte Havermans. In the coastal areas of the McMurdo Sound, most of the amphipods studied carried a pteropod rucksack. Subsequent genetic and morphological investigations provided new insights. Previously, such tandems were completely unknown for the open, ice-free waters of Southern Ocean, and now the biologists have discovered this behaviour in two species: the amphipod species Hyperiella dilatata carried a type of pteropod known as Clione limacina antarctica, while the crustacean Hyperiella antarctica was associated with the pteropod Spongiobranchaea australis. Our sample size was too small to say without doubt whether these are species-specific pairs, where only a certain amphipod carries a certain pteropod species. During the expedition along the Polar Front to the eastern Weddell Sea, the AWI biologist’s team found only four such tandems.

The research team’s findings regarding the benefits for the animals are very exciting. Behavioural observations of the free-living pteropods show that cod icefishes and other predators are deterred by the chemicals the gastropods produce. When amphipods take pteropods “hostage,” they are not affected by their poison. Icefishes quickly learn that amphipods with rucksacks are not tasteful and so avoid those with a pteropod on their back.

Because the conditions in the open Southern Ocean are different to those in coastal ecosystems, several open questions remain: whether or not predatory squid and lanternfish, commonly found in the area, are also deterred by the chemicals has not yet been investigated. It is also still unclear to which extent the pteropod benefits from saving energy by being carried by its host. The researchers observed that the amphipod uses two pairs of legs to keep the gastropod on their back so that they are completely unable to actively hunt for suitable food where it is available. “On the basis of our current understanding, I would say that the amphipods kidnap the pteropods,” sums up Charlotte Havermans with a wink.

The biggest lesson the authors draw from their discovery: “We are probably overlooking numerous such associations between species, because they are no longer visible after net sampling.” Unlike shelled gastropods and crustaceans, which remain relatively intact, jellyfish and other delicate animals are crushed in the nets. “In the future we will hopefully be able to use suitable underwater technologies with high-definition cameras to investigate even the smallest life forms in their habitat. This will provide insights into the numerous exciting mysteries of interspecific interactions, which have so far remained hidden for biologists — but which undoubtedly play an important role in predator-prey relationships in the ocean.”