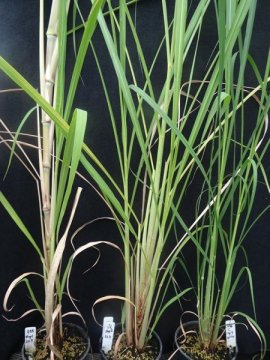 Despite international breeding efforts, advanced agronomy and effective management of pests and diseases, sugarcane yields have been static for decades owing to constraints on culm development. The culm’s sugar storage capacity is physically limited, restricting the volume of sucrose and biomass that can be obtained from the crop for sugar and second-generation (2G) ethanol production, according to experts in the area.

“Breaking through this developmental threshold by conventional breeding [crossing of varieties] is proving hard,” said Marcelo Menossi, a Full Professor in the Department of Genetics, Evolution & Bioagents at the University of Campinas’s Biology Institute (IB-UNICAMP) in Brazil.

Menossi, in collaboration with postgraduate students supervised by him and with colleagues at Brazil’s National Bioethanol Science & Technology Laboratory (CTBE), Sugar Research Australia and Germany’s Martin Luther University Halle-Wittenberg (MLU), found that the key to surmounting this constraint on sugarcane yield could lie in a gene called ScGAI.

In a study performed during a project linked to BIOEN, the Bioenergy Research Program from FAPESP — São Paulo Research Foundation, Menossi and collaborators discovered that ScGAI is an important regulator of culm development in sugarcane.

By manipulating the activity of this gene in transgenic sugarcane lines developed in Australia, the researchers succeeded in substantially increasing culm volume and changing the allocation of carbon to structural and storage molecules. They have now reported their findings in an article published in Journal of Experimental Botany.

“The sugarcane variety in which we altered the expression of ScGAI developed far more quickly. This means it should be possible to breed a variety of energy sugarcane that matures faster and has higher biomass production per unit of time,” Menossi said.

The discovery was derived from the PhD research of Rafael Garcia Tavares, conducted at IB-UNICAMP under Menossi’s supervision and with a scholarship from FAPESP.

During the study, ScGAI was found to mediate the regulation of developmental hormones used by sugarcane growers, such as ethylene and gibberellins.

Gibberellins are widely employed to improve yield in many crops and accelerate sugarcane ripening by triggering the rapid degradation of DELLA proteins, which are thereby prevented from interacting with and degrading other proteins that stimulate culm development.

“Ethylene is typically applied to sugarcane plantations during the ripening stage, when the farmer wants the plant to continue accumulating sucrose instead of growing and producing more leaves. Unlike gibberellins, it stabilizes DELLAs and lets them interact with and degrade other growth-promoting proteins. However, the role of DELLAs as regulators of sugarcane growth was poorly understood,” Menossi said.

To glean a better understanding of how DELLAs regulate sugarcane growth, especially with regard to culm development, the researchers conducted an experiment in which they altered ScGAI expression in an Australian sugarcane variety.

In some lines, ScGAI was silenced to reduce the production of DELLAs and stop them from degrading other proteins that contribute to the plant’s development.

In other lines, the researchers took steps to ensure that the gene was overexpressed with the aim of increasing the production of DELLAs and stabilizing them so that they continued to degrade the growth-promoting proteins.

In contrast, ScGAI-silenced plants were taller and exhibited rapid internode elongation, increased phytomer production, and greater carbon allocation to the stem. The phytomer is defined as a unit comprising a node and internode, its axillary buds, and an attached leaf.

“The study clearly shows that the ScGAI gene is a fundamental component of sugarcane development and can be a target for genetic manipulation to permit intervention in the speed of plant growth by regulating DELLA proteins,” said the coordinator of the FAPESP research project.

The researchers have applied for a patent on the method they invented to manipulate ScGAI in order to decrease the amount of DELLAs in sugarcane so that the plant develops faster. Two companies have expressed an interest in the technology.

“The next step is to perform field tests and see if we can obtain the same results by growing the transgenic lines with the manipulated gene in a greenhouse,” Menossi said.