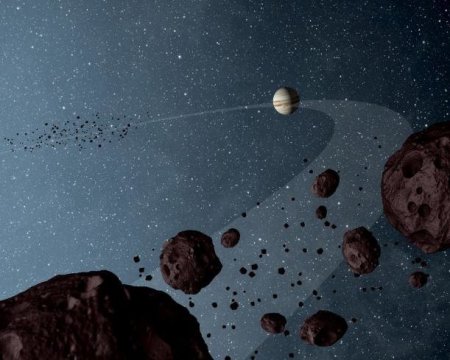 It is known that gas giants around other stars are often located very near their sun. According to accepted theory, these gas planets were formed far away and subsequently migrated to an orbit closer to the star.

Now researchers from Lund University and other institutions have used advanced computer simulations to learn more about Jupiter’s journey through our own solar system approximately 4.5 billion years ago. At that time, Jupiter was quite recently formed, as were the other planets in the solar system. The planets were gradually built up by cosmic dust, which circled around our young sun in a disk of gas and particles. Jupiter was no larger than our own planet.

The results show that Jupiter was formed four times further from the sun than its current position would indicate.

“This is the first time we have proof that Jupiter was formed a long way from the sun and then migrated to its current orbit. We found evidence of the migration in the Trojan asteroids orbiting close to Jupiter,” explains Simona Pirani, doctoral student in astronomy at Lund University, and the lead author of the study.

These Trojan asteroids consist of two groups of thousands of asteroids that reside at the same distance from the Sun as Jupiter, but orbiting in front of and behind Jupiter, respectively. There are approximately 50 per cent more Trojans in front of Jupiter than behind it. It is this asymmetry that became the key to the researchers’ understanding of Jupiter’s migration.

“The asymmetry has always been a mystery in the solar system,” says Anders Johansen, professor of astronomy at Lund University.

Indeed, the research community had previously been unable to explain why the two asteroid groups do not contain the same number of asteroids. However, Simona Pirani and Anders Johansen, together with other colleagues, have now identified the reason by recreating the course of events of Jupiter’s formation and how the planet gradually drew in its Trojan asteroids.

READ  Report: In death of dinosaurs, it was all about the asteroid -- not volcanoes

Thanks to extensive computer simulations, the researchers have calculated that the current asymmetry could only have occurred if Jupiter was formed four times further out in the solar system and subsequently migrated to its current position. During its journey towards the sun, Jupiter’s own gravity then drew in more Trojans in front of it than behind it.

According to the calculations, Jupiter’s migration went on for around 700,000 years, in a period approximately 2-3 million years after the celestial body started its life as an ice asteroid far from the sun. The journey inwards in the solar system followed a spiralling course in which Jupiter continued to circle around the sun, albeit in an increasingly tight path. The reason behind the actual migration relates to gravitational forces from the surrounding gases in the solar system.

READ  Research: Did mosasaurs do the breast stroke? --

The simulations show that the Trojan asteroids were drawn in when Jupiter was a young planet with no gas atmosphere, which means that these asteroids most probably consist of building blocks similar to those that formed Jupiter’s core. In 2021, NASA’s space probe Lucy will be launched into orbit around six of Jupiter’s Trojan asteroids to study them.

“We can learn a lot about Jupiter’s core and formation from studying the Trojans,” says Anders Johansen.

The authors of the study also suggest that the gas giant Saturn and the ice giants Uranus and Neptune could have migrated in a similar way.