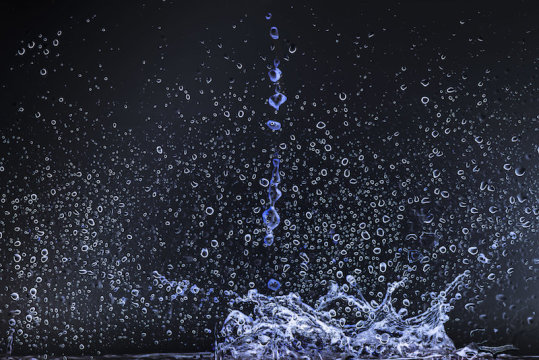 A decade ago a new idea was brought into the general scientific community — shedding water from condensers was more efficient by using surface tension to make microscopic water droplets “jump” off the surface. The idea took the research community by storm.

“In the last decade since I discovered the jumping droplets, the debate has been using gravity versus jumping,” said Jonathan Boreyko, assistant professor of mechanical engineering in the College of Engineering.

The problem was, because the jumping itself occurs independent of gravity, what happened after the jump wasn’t being considered. Five years after his original paper, Boreyko went back to the lab to discover that for efficiency, jumping and gravity should not be mutually exclusive. Now, in a paper published in the journal Joule, Boreyko and doctoral student Ranit Mukherjee began to consider the orientation of the surface and found that by using vertical condensers, the teaming of superhydrophobic surfaces and gravity produces a condenser that is at least twice as efficient.

Using superhydrophobic surfaces, which have nano-pillars and a hydrophobic coating, water droplets can unleash the power of surface tension whenever two or more drops touch and merge together, to jump away from the surface regardless of the orientation of that surface. However, not all droplets make a clean getaway.

“There are some droplets that either fail to jump, or fall back on the surface,” Boreyko explained. “Those droplets can then join with others and form a buildup of condensation that coats the condenser and limits its ability to cool. For these larger droplets, where jumping has failed, draining them by gravity would be a great insurance policy.”

Historically, condensers were always oriented vertically to allow the water to drain by gravity. However, researchers looking at surface-tension-powered droplets were mostly studying the jumping phenomenon on flat surfaces and not talking about the importance of orientation.

“The research has been so focused on using surface tension to shed droplets instead of gravity, that nobody considered that this wasn’t an ‘and/or’ situation,” Boreyko said. “It turns out that surface tension and gravity work far better together than either works on its own.”

“What we found illustrates that there is a single, best way to shed moisture from condensers which increases the efficiency of a variety of items including power plants, or anything that requires heat exchange,” Mukherjee said.

Materials provided by Virginia Tech. Original written by Rosaire Bushey. Note: Content may be edited for style and length.