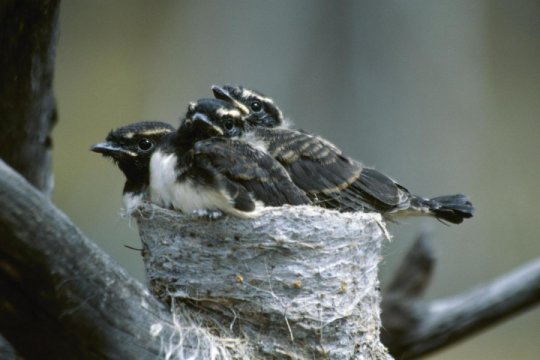 Baby birds and eggs are on the menu for at least 94 species of animals in Australia’s forests and woodlands, according to new research from The University of Queensland.

“Predators are always looking for their next meal and now we know who Australia’s common culprits are.

“In the reviewed research, 94 nest predators — from birds to reptiles to ants — were found to be attacking both natural and artificial nests.

“If you take out the artificial nests, it’s 69 species, and from that data there’s a clear dominant nest attacker in the Australia’s natural environment — the pied currawong.”

The pied currawong was found to be taking eggs and young from 29 different bird species; followed by the square-tailed kite (18 species), the tiger snake (15 species), the laughing kookaburra (10 species) and the grey strike-thrush (eight species).

“These five nest predators were recorded as attacking a whopping 40 per cent of the prey measured by the number of prey species taken,” Mr Fulton said.

“The other 60 per cent of predation was carried out by the other 64 species, which included, by order of importance: birds, mammals, reptiles, frogs and ants.”

It also appears that the young and eggs of small ‘cup’ nesting birds, like the willie wagtail, are more often on the menu than other birds.

“This is probably because birds like willie wagtails are easily seen in the open, and they’re probably delicious and certainly nutritious,” Mr Fulton said.

“And predation at ‘cup’ and ‘dome’ nests was more frequently reported than at burrow, ground and hollow nests.

“When birds attack, they also prefer to eat the babies of other bird species whose parents are a quarter to a third of the predators’ weight.

“It’s a bird-eat-bird world out there, but at least we now know who’s doing the eating.”