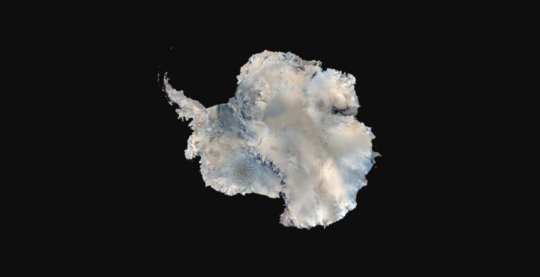 Antarctica is high and dry and mostly bitterly cold, and it’s easy to think of its ice and snow as locked away in a freezer, protected from melt except around its low-lying coasts and floating ice shelves. But that view may be wrong.

Meltwater is now ponding on the surface of Antarctica’s inland ice and in larger and more numerous ponds on the ice shelves surrounding the continent. This creates stresses that could break up the the ice shelves, which buttress inland ice from flowing more rapidly into the ocean. And models suggest that by the end of this century, it will be warmer air — rather than warmer ocean water — that plays the largest role in driving Antarctica’s contributions to sea level rise.

“It is crucial that we develop a better understanding of the dynamics of Antarctica’s 190 feet (58 m) of potential sea level rise sitting frozen atop the continent,” said Alison Banwell, a CIRES postdoctoral visiting fellow and co-author of an assessment published this week in Nature Climate Change. “We have gained some insight from Greenland, where there’s much greater surface melting occurring today, and a whole host of different processes are at play. For example, if there’s sufficient surface melting on Antarctica’s grounded ice, some of this water could make it to the ice sheet base and affect the ice’s flow into the ocean, as it is already doing under much of the Greenland Ice Sheet.”

In their Perspectives piece, Banwell and her colleagues — from Columbia University’s Lamont-Doherty Earth Observatory and Rowan University — identify key gaps in scientists’ understanding of Antarctica. They discuss the need for more research on, for example, how snow on the continent compacts into firn, and then ice; how and whether surface melt may ultimately reach the base of the ice sheet; and the possibility of more widespread surface and subsurface lakes forming on ice shelves.

Understanding and being able to predict the occurrence of such processes is crucial for scientists who want to understand global sea level rise, and the risks posed to coastal dwellers around the world.

Ultimately, understanding Antarctica’s future — including the 190 feet of potential sea level rise currently frozen into its snow and ice — requires recognition that the continent is changing in new ways, Banwell said. “And that ultimately requires an increased multidisciplinary, and international effort. We need observations today, from field teams on the ground, airplanes and satellites, and it is crucial that ice sheet and climate models are able to represent the diverse processes affecting melting, hydrology and dynamics of the Antarctic Ice Sheet.”