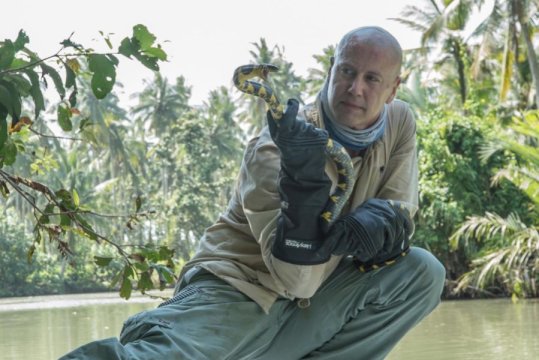 A team of international scientists has discovered why brown tree snakes have become one of the most successful invasive species.

The research team, led by University of Queensland scientists, has been studying why a type of cat-eyed snake has been so effective at devastating native bird populations on the island of Guam.

Associate Professor Bryan Fry from UQ’s School of Biological Sciences said the takeover began when the brown tree snake was introduced on the Pacific island during World War II.

“The snake hitchhiked on troop carriers from the Australian region and has since driven multiple native bird species into extinction, with only three species now found on the island,” he said.

“The snakes’ impact was so devastating, it now ranks among the worst pests of all time.”

The team, including UQ PhD students Daniel Dashevsky and Jordan Debono as well as researchers from Florida State University, investigated the species’ toxin, which is particularly venomous to birds.

“The brown tree snake’s venom, while not dangerous to humans, is 100 times more toxic to birds than to mammals,” Dr Fry said.

“It contains a toxin that’s made up of two smaller toxins joined together, a feature that was believed to be unique to brown tree snakes.

“Daniel and Jordan’s research has revealed that this is not the case and that any cat-eyed snakes belonging to the genus Boiga would have caused similar devastation.

“It’s just that this particular species was transported to Guam by accident.”

Cat-eyed snakes evolved in Africa and rapidly spread across the Indian subcontinent, throughout South-East Asia and to Australia, with the team finding the snake’s toxin type was responsible for its explosive natural spread.

“For the last 80 years or so, for the brown tree snake at least, this biological advantage has been aided by the introduction of air travel,” Dr Fry said.

“The United States government is still flying military planes from Guam to Hawaii and the snakes continue to hitchhike.

“They’re regularly intercepted in the Hawaii airports, so if these direct flights are allowed to continue, it’s only a matter of time until they get to Hawaii and wipe out the birds like they did on Guam.

“Now we know more about the snake’s basic biology, we can help in developing a smart approach to preventing and managing this and other invasive species.”