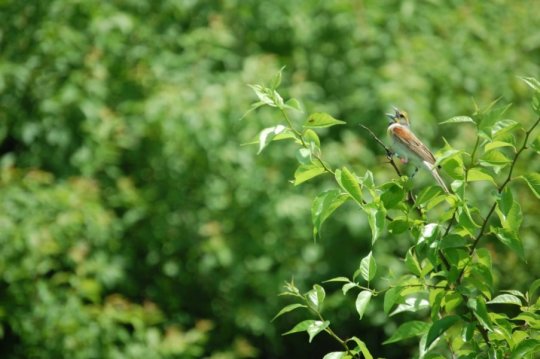 The prairies of North America once covered vast stretches of land, with towering grasses creating ideal nesting and forage habitat for grassland birds. But the deep, rich soil and treeless expanse also represented the ideal conditions for farming — both row crops and cattle grazing — in the eyes of settlers. Today, largely thanks to agricultural conversion, a mere 1 percent of tallgrass prairie remains. And what’s left is now being threatened by invasive species and forest encroachment.

“With grasslands in steep decline, the birds that depend on them are also disappearing. Therefore, it is urgent that we understand how these more recent changes — invasive species and landscape shifts — influence grassland bird reproduction,” says Scott Maresh Nelson, a doctoral student advised by Professor Jim Miller in the Department of Natural Resources and Environmental Sciences (NRES) at the University of Illinois.

In a recent study published in Landscape Ecology, Maresh Nelson and his colleagues found that a common cattle forage grass, tall fescue, is associated with nest failure in dickcissels, small grassland birds similar to sparrows.

“Despite its name, tall fescue is actually a lot shorter than native grasses. It takes over and makes the landscape more uniform,” says Jaime Coon, also a doctoral student in Miller’s group and a co-author on the study. “Whereas the vegetation was very structurally diverse before, with some tall plants and some short, now you have a mat. It changes the vegetation structure quite a bit.”

In their Iowa-based study, the researchers identified all the plants within a 16-foot radius of every dickcissel nest they found — all 477 of them — and the more tall fescue there was, the greater the chances of nest failure. No other plant in their surveys had significant predictive power.

“We were interested that tall fescue had such strong ecological effects, in part because fescue is a very polarizing plant,” Coon says.

Her comment is based on extensive landowner surveys in the area, which revealed that while some respondents liked a high abundance of fescue, a majority would prefer less fescue on pasture land. Although it is palatable and drought tolerant, the grass hosts a fungus that can stress grazing cattle.

“The fact that fescue came out as one of the main drivers of nest failure means it might be a situation where removing an invasive grass might benefit wildlife and people’s livelihoods,” she says.

But why does fescue contribute to nest failure? The researchers point to earlier studies demonstrating that tall fescue hosts fewer insects than other types of vegetation. With less food around their nests, birds may be forced to make more feeding trips, attracting the attention of potential predators with every flight.

Fescue was also associated with nest parasitism by cowbirds, the most common avian parasite in North American grasslands. Cowbirds never build their own nests; instead, they lay their eggs in existing nests of other bird species. When a mother dickcissel finds a cowbird egg in her nest, she cares for it as one of her own, leaving fewer resources for her biological offspring. The researchers aren’t sure why fescue affected parasitism, but parasitized nests in the study had fewer dickcissel eggs, failed more frequently, and produced fewer dickcissel fledglings.

Zooming out, the researchers looked at the role of large-scale landscape changes on nest survival. They mapped the presence of row crops and forested areas near their study sites, and found that dickcissel nests near forested areas were less likely to be parasitized.

“We think the cowbirds were laying their eggs in the nests of woodland birds instead. It was surprising, because dickcissel nests are usually their favorite,” Maresh Nelson says.

Nests near row crops were slightly more at risk of failure, possibly due to greater nest predation by mammals such as raccoons that spend time near crop fields as a food source. But Maresh Nelson says that result wasn’t entirely clear. “It seems like vegetation right around the nest is more important for survival than the large-scale context.”

That ability to rank the relative importance of habitat factors influenced by human activity is one of the things that makes the study unique. And it allows the researchers to make nuanced recommendations to landowners and land managers.

“For people investing in land for conservation purposes, the landscape around the grassland may not be quite as important as what’s actually in it, in terms of nest survival. But if they have the option to invest in land near a woodland, that could reduce nest parasitism and benefit the grassland species, although that’s complicated since some predators may be more abundant near woods,” Maresh Nelson says. “It’s really important that we maximize the ability of the few remaining grasslands to provide for the species that depend on them.”