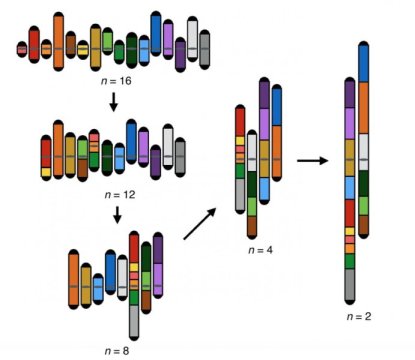 Baker’s yeast survive and grow after a drastic reorganization, not of their genes, but of the chromosome superstructures that house, protect and control access to their DNA code, a study just published in Nature finds.

Led by NYU School of Medicine, a research team fused together chromosomes in stages until the 6,000 genes in a species of one-celled fungus, Saccharomyces cerevisiae, were contained in two massive chromosomes instead of the naturally occurring 16 in each cell nucleus. The researchers also found that members of this yeast species could no longer make viable reproductive cells if the difference became too great between the numbers of chromosomes inherited from each of their “parents.”

Engineering such “reproductive isolation” between yeast strains would be a must to achieve certain hoped-for, future applications of yeast — like recycling agricultural waste to make fuel, or fighting starvation by supplementing livestock feed, say the study authors. Such endeavors would require the creation of strains that could be released into the field, but that were incapable of mating with naturally occurring yeast to alter ecosystems.

Further in the future, a better understanding of how chromosomes are copied and apportioned in sex cells — spores in yeast; eggs and sperm in humans — may suggest ways to counter errors that cause too short, too long, missing or extra chromosomes to be passed down in human cells. Such events are a main cause of miscarriages and mental retardation, including Down’s syndrome, in which an embryo receives an extra copy of the 21st human chromosome. Yeast chromosomes are similar enough to human ones to make good models for study.

“We found that yeast can tolerate drastic changes in chromosome number without disrupting the action of the genes in them, more evidence of their robustness as an engineering platform,” says senior study author Jef Boeke, PhD, director of the Institute for Systems Genetics at NYU Langone Health. “Beyond applications, this work sheds light on the wild trajectory of accidental chromosome duplications and fusions across evolution that has left one ant species with a single pair of chromosomes, humans with 23 pairs, and one species of butterfly with 220. We are learning how one species becomes two.”

The study results concern chromosomes, large protein bundles that, upon receiving the right signals, unwind to expose for reading by the cellular machinery just the bits of DNA instructions needed for the jobs at hand in each cell type. All chromosomes unwind when it is time to copy the entire genetic code before cell division, where one cell becomes two. Such divisions either create more genetically identical cells during growth (mitosis), or further divide a parental cell’s chromosomes in rounds (meiosis) that yield sex cells, which can then combine with other sex cells to create new organisms.

As cells get ready to divide such that each resulting cell gets its proper share of DNA, the newly copied chromosomes are connected by special DNA sets called centromeres, creating pairs with four chromosome “arms.” Each arm is capped by DNA sets called telomeres which protect against enzymes that would otherwise damage the exposed tips.

The current study authors used the famous CRISPR-Cas9 gene editing technology to cut 14 centromeres and 28 telomeres out of the complete set of yeast chromosomes (the genome). Without these telomeres or centromeres in place, the remaining DNA chains fused in steps until only two remained, each containing roughly half the genetic material for the S. cerevisiae species.

Interestingly, the team was unable to generate a living strain of yeast with just one chromosome pair housing all of its genes. The authors say this may be because the two large chromosomes operating in the new strain had arms that, at about 5.9 million DNA molecular letters (bases) each, approached the maximum length limit. Longer than that and an arm is likely to have its end clipped off as a cell divides.

Remarkably, the researchers found that yeast with chromosomes that are up to four times the maximum size of those seen in nature survived, divided and multiplied (grew) via mitosis at roughly the same rates as natural strains.

However, when the team took the offspring from crosses of yeast strains with different chromosome numbers, and then induced the offspring of the crosses to make sex cells via meiosis, the ability to produce viable spores dropped in this next generation as the difference grew between the chromosome numbers of their parents. The team surmises that this is because chromosomes within such sex cells no longer lined up so that the DNA could be divided properly during cell division, leaving some with lethal DNA dosage abnormalities.

Experiments showed that a difference in chromosome number of eight, say after eight fusions, was enough to keep an engineered strain from interbreeding with its ancestral species, achieving the reproductive isolation so important to envisioned applications. When two members of a species can no longer interbreed, they can no longer mix DNA and accumulate different genetic changes over time. This begins the process of their becoming different species, says Boeke.

Along with Boeke, authors of the current study were Jingchuan Luo and Xiaoji Sun in the Institute for Systems Genetics at NYU Langone Health, along with Brendan Cormack in the Department of Molecular Biology & Genetics at Johns Hopkins University School of Medicine. The work was supported by National Science Foundation grant MCB-1616111.