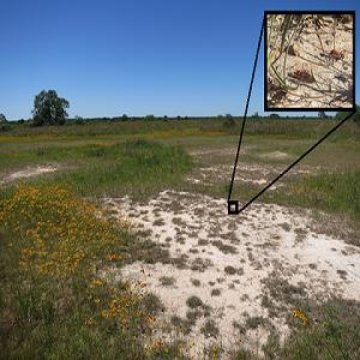 A University of Oklahoma team from the Geographical Ecology Group has published a new study in the journal Ecology on the nutritional preferences of diverse insect communities from Texas to Minnesota. The OU team conducted 54 experiments in both grazed and ungrazed grasslands to determine the salt cravings of insects and the types of insects that crave salt. The OU team found that insects not only crave salt, but will search for it in their grassland habitats.

“Sodium is relatively unique among the elements in that it is required by all animals, but not used by plant life,” said Ellen Welti, lead author on the study and postdoctoral researcher in the OU Department of Biology. “Sodium is a critical nutrient for animal cell membrane functions while sodium is generally a stressor for plants. In other words, plants don’t need salt and plant eaters do.”

OU team members conducted a simple experiment containing plots receiving water only and the other half of the plots receiving a solution of table salt or simulated cow urine. This experiment was repeated at 54 grassland sites across the United States. Two days after setting up each experiment, a team member would literally vacuum the bugs from the plots. The bugs captured in the bag would then be frozen, sorted, counted and compared between salted and unsalted plots. At each site, plant and soil samples were taken to characterize the spectrum of grasslands from ‘bland to salty.’

A total of 32,430 insects were identified from 120 taxa. Naturally, grasslands near the Gulf of Mexico tended to have saltier plants, but surprisingly had less salty soils, likely due to their sandy composition. The experimental plots splashed with the simulated cow urine attracted an average of 70 percent more bugs than those splashed with water. Additionally, the study found that grasslands were less salty hosted insects with keener cravings for salt.

“This study highlights the knowledge gap in understanding nutrient limitation for animal communities and the importance of sodium,” said Welti. “While sodium attraction across a broad geographic gradient suggest widespread sodium limitation, it is not known how long-term changes in sodium levels translate into changes in animal abundances and shifts in community composition.”

Materials provided by University of Oklahoma. Note: Content may be edited for style and length.