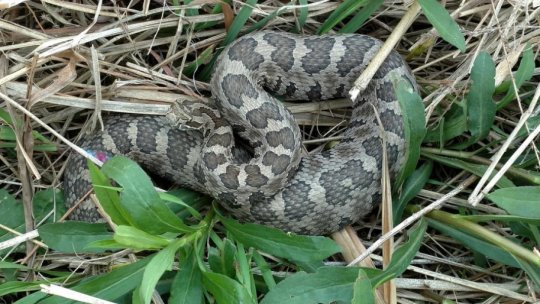 Habitat loss, habitat fragmentation and the loss of genetic diversity are the three main factors driving the extinction of many wild species, and the few eastern massasauga rattlesnakes remaining in Illinois have certainly suffered two of the three. A long-term study of these snakes reveals, however, that — despite their alarming decline in numbers — they have retained a surprising amount of genetic diversity.

The new findings are reported in the journal Copeia.

The genetic analysis did reveal, however, the loss of several rare versions of genes over the course of the 10-year study, which ended in 2012. Such losses can signal the early stages of local extinction, Baker said.

In 2015, the U.S. Fish and Wildlife Service listed the eastern massasauga as a threatened species nationally. Massasaugas are endangered in Illinois.

The widespread conversion of prairie to row-crop agriculture and the construction of the Carlyle Lake dam in central Illinois were among the biggest assaults on massasauga populations in the state, said INHS herpetologist Michael Dreslik, a coauthor of the study.

“The lake was constructed as an impoundment of the Kaskaskia River in 1967 and flooded bottomland habitat,” he said. “The remaining massasaugas are now clustered in wet prairies containing crayfish burrow complexes that shelter the snakes. These represent the only remaining suitable habitat patches for them.”

The construction of Carlyle Lake did not result in a genetic “bottleneck,” however, Baker said.

“Bottlenecks can occur when a large population is quickly reduced in size, causing a loss of genetic diversity,” she said.

Despite the positive findings, the snakes are likely to become locally extinct without significant intervention, the researchers said. According to a 2017 estimate, the largest subpopulation of wild massasaugas remaining in Illinois includes 26-69 snakes.

“Previous studies propose that a total population of at least 100 is required for short-term maintenance of genetic diversity, and a population of 1,000 is needed to ensure long-term conservation,” Baker said. “Conservation and management actions that can increase population size should be enacted as soon as possible to preserve the remaining genetic diversity and ensure the persistence of the species in Illinois.”