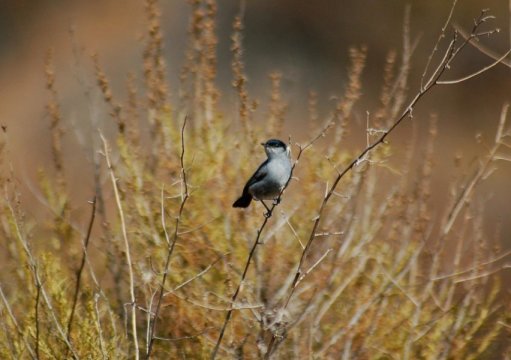 A study published in The Condor: Ornithological Applications presents a case study on how bird surveys can better inform conservation and vegetation restoration efforts. Previous conservation methods have emphasized plants as the key to recreating habitat preferred by a sensitive animal. However, this study shows that there’s more to the coastal sagebrush habitat of California Gnatcatchers than just having the right plants present. Abiotic components such as topography and soil are important drivers of the biotic components, including plants, which pair together to make the complete ecosystem these birds need. Given this more complete perspective, future conservation efforts would be wise to consider all of the variables that make up an animal’s habitat.

The U.S. Fish and Wildlife Service’s Clark Winchell and Colorado State University’s Paul F. Doherty, Jr., set out to find a way to improve the traditional “single-species -oriented” conservation plan. They used bird survey data to more accurately identify favorable habitat for California Gnatcatcher occupancy and discovered that as the ratio of coastal sagebrush increased from 10% to 40%, the probability of colonization and presence of these birds tripled. The amount of openness in the sagebrush habitat also correlated with the birds’ occupancy probability (30-40% openness was ideal for the birds). Elevation and soil texture also influenced suitable habitat, with lower elevations and loam or sandy loam soils most preferred. Winchell and Doherty also found that the gnatcatchers preferred southern aspects, shallow slopes, and inland areas over other options. Being so detailed and using such a fine scale allowed more specific areas to be identified as suitable for gnatcatchers. Thorough research such as this will better aid conservation efforts, both by informing where restoration might be most successful and by providing restoration targets.

Winchell comments, “Restoration ecologists are generally not gnatcatcher biologists, and vice versa. Sometimes we tend to place restoration projects where land becomes available after political negotiations. We may want to consider what is that parcel of land trying to tell us — what does the land want to be, so to speak — versus assuming we can dictate the final outcome for a location. Considering the entire functionality of the surrounding ecosystem, including the physical components, the biological community, and understanding the dynamism of the ecosystem will lead to improved restoration and wildlife management outcomes and our study is one small step in that direction.”

These results correlating soil, vegetation, and gnatcatcher occupancy harken back to lessons that Aldo Leopold taught us — namely, to start with the land and work with the land when managing wildlife. Leopold’s holistic approach to conservation included the soils, waters, plants, and animals and is still relevant today.