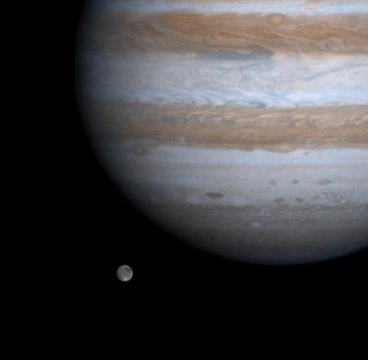 A recently published study led by researchers at the University of Hawai’i at Manoa School of Ocean and Earth Science and Technology reveals Ganymede, an icy moon of Jupiter, appears to have undergone complex periods of geologic activity, specifically strike-slip tectonism, as is seen in Earth’s San Andreas fault. This is the first study to exhaustively consider the role of strike-slip tectonism in Ganymede’s geologic history.

Plate tectonics is the process on Earth that has created many familiar large scale features — oceanic and continental crust, mountain ranges, mid-ocean ridges, for example — and phenomena such as earthquakes.

“The heavily fractured surface of Ganymede displays many distinctive regions of inferred strike-slip faulting that may be important to the structural development of its surface,” said Marissa E. Cameron, lead author of this study who completed the work as a doctoral candidate in SOEST’s Department of Earth Sciences.

Both Ganymede and Europa, another of Jupiter’s moons, are believed to be ocean worlds, that is they have a liquid water ocean lying beneath an ice shell. Europa is thought to be the most likely place in the solar system to find life today, presumably in the ocean where it may be protected from extreme radiation by the ice shell.

Scientists know that Europa has tectonic processes similar to Earth’s. However, while Ganymede was once tectonically active, it is no longer — which offers researchers a chance to look into Europa’s future.

To better understand the role of strike-slip tectonism in shaping the complex icy surface of Ganymede, the research team perform extensive, methodical mapping of nine locations using imagery primarily collected by the Galileo spacecraft that orbited Jupiter between 1995 and 2003.

“The unexpected finding was how commonplace strike-slip faulting was. Indicators of strike-slip were observed at all nine sites, representing various geographic locations on Ganymede,” said Cameron. “Additionally, the similarities between the sites may be indicative of a past, larger scale process. Incorporating our observations with previous studies provides an improved representation of Ganymede’s tectonic history and allows us to learn more about its neighbor, Europa.”

Understanding more about the dynamic system of Jupiter’s ocean worlds allows scientists to prepare as much as possible for future missions to explore these extraterrestrial bodies. Because of the increased interest in Europa and its potential ability to host life, a new flagship mission, Clipper, is scheduled to launch between 2022 — 2025 and make 45 close-by orbits of Europa.