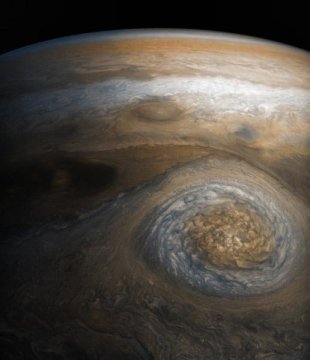 Lab-based mimicry allowed an international team of physicists including Carnegie’s Alexander Goncharov to probe hydrogen under the conditions found in the interiors of giant planets — where experts believe it gets squeezed until it becomes a liquid metal, capable of conducting electricity. Their work is published in Science.

Hydrogen is the most-abundant element in the universe and the simplest — comprised of only one proton and one electron in each atom. But that simplicity is deceptive, because there is still so much to learn about it, including its behavior under conditions not found on Earth.

For example, although hydrogen on the surface of giant planets, like our Solar System’s Jupiter and Saturn, is a gas, just like it is on our own planet, deep inside these giant planetary interiors, scientists believe it becomes a metallic liquid.

“This transformation has been a longstanding focus of attention in physics and planetary science,” said lead author Peter Celliers of Lawrence Livermore National Laboratory.

The research team — which also included scientists from the French Alternative Energies and Atomic Energy Commission, University of Edinburgh, University of Rochester, University of California Berkeley, and George Washington University — focused on this gas-to-metallic-liquid transition in molecular hydrogen’s heavier isotope deuterium. (Isotopes are atoms of the same element that have the same number of protons but a different number of neutrons.)

They studied how deuterium’s ability to absorb or reflect light changed under up to nearly six million times normal atmospheric pressure (600 gigapascals) and at temperatures less than 1,700 degrees Celsius (about 3,140 degrees Fahrenheit). Reflectivity can indicate that a material is metallic.

“To build better models of potential exoplanetary architecture, this transition between gas and metallic liquid hydrogen must be demonstrated and understood,” Goncharov explained. “Which is why we focused on pinpointing the onset of reflectivity in compressed deuterium, moving us closer to a complete vision of this important process.”