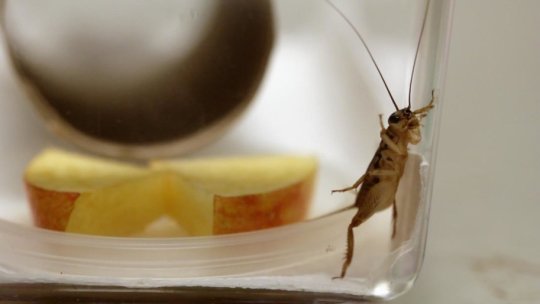 Crickets that are exposed to human drugs that alter serotonin levels in the brain are less active and less aggressive than crickets that have had no drug exposure, according to a new study led by researchers from Linköping University. The findings have been published in Scientific Reports.

Individuals in many animal species show different personality types. Some individuals are for example consistently bolder than others.

“However, in biology, we still do not fully understand what causes people or animals to show differences in personality. In humans, people with different levels of brain chemicals, such as serotonin and dopamine, often behave differently. However, we do not know if these chemicals can explain personality differences also in other species, and if the chemicals cause the observed differences or if both the differences in behavior and chemical levels are caused by another underlying factor,” says Robin Abbey-Lee, postdoctoral researcher at the Department of Physics, Chemistry and Biology, IFM, and lead author of the study.

The researchers, therefore, set out to experimentally change the levels of the brain chemicals serotonin and dopamine in the crickets. They did that by giving the crickets human pharmaceuticals that are known to act on the serotonin and dopamine systems and are used to treat depression and Parkinson disease, respectively. Because dopamine and serotonin systems are similar across species, these chemicals were predicted to also affect cricket behavior.

“In this study we wanted to address an important gap in our knowledge by experimentally altering these brain chemicals and seeing if we could get a resulting behavioral change,” says Hanne Løvlie, associate professor at IFM, and senior author.

What the researchers found was that changing the serotonin levels made crickets less active and less aggressive. But changing the dopamine levels of crickets did not change their behavior.

“This suggests that serotonin has a clearer underlying role in these behaviors,” says Hanne Løvlie.

The findings add to our understanding of why animals have personality. They also raise the issue of how pharmaceuticals leaking into nature through human waste water may affect animals.