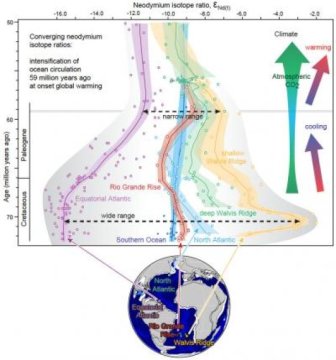 The scientists made this discovery when they compared neodymium isotope signatures of deep sea sediment samples from both regions of the Atlantic. Their paper — ‘Major intensification of Atlantic overturning circulation at the onset of Paleogene greenhouse warmth’ — published today in Nature Communications, reveals that the more vigorous circulation together with an increase in atmospheric CO2 led to a climatic tipping point. With a resulting more even distribution of heat over the earth, a long-term cooling phase ended and the world headed into a new greenhouse period.

The story revealed in this paper begins at the end of the Cretaceous period (ending 66 million years ago), when the world was between two greenhouse states. Climate had been cooling for tens of millions of years since the peak hothouse conditions of the mid-Cretaceous, around 90 million years ago. Despite long-term cooling, temperatures and sea level at the end of the Cretaceous period were higher than at present day.

Dr Sietske Batenburg says: ‘Our study is the first to establish how and when a deep-water connection formed. At 59 million years ago, the Atlantic Ocean truly became part of the global thermohaline circulation, the flow that connects four of the five main oceans.’

The Atlantic Ocean was still young, and the North and South Atlantic basins were shallower and narrower than today. The equatorial gateway between South America and Africa only allowed a shallow, surface-water connection for much of the late Cretaceous period. Active volcanism formed underwater mountains and plateaus that blocked deep-water circulation. In the South Atlantic, the Walvis Ridge barrier formed above an active volcanic hotspot. This ridge was partially above sea level and formed a barrier for the flow of deep-water masses.

As the Atlantic Ocean continued to open, the oceanic crust cooled and subsided. Basins became deeper and wider, and submarine plateaus and ridges sank, along with the crust. At some point, deep water from the Southern Ocean was able to flow north across the Walvis Ridge and fill the deeper parts of the Atlantic basins.

From 59 million years ago onwards, Nd-isotope signatures from the North and South Atlantic were remarkably similar. This may indicate that one deep-water mass, likely originating from the south, made its way through the Atlantic Ocean and filled the basin from deep to intermediate depths. The enhanced deep water exchange, together with increasing atmospheric CO2, may have enabled a more efficient distribution of heat over the planet.

The current rate of climate change by CO2 emissions from human activity by far surpasses the rate of warming during past greenhouse climates. Studying ocean circulation during the most recent greenhouse interval in the geologic past may provide clues as to how ocean circulation might develop in the future, and how heat will be distributed over the planet by ocean currents.

This research is the result of an international collaboration with the Goethe-University Frankfurt; the Ruprecht-Karls-University of Heidelberg; the GEOMAR Helmholtz Centre for Ocean Research Kiel; the Federal Institute for Geosciences and Natural Resources in Hannover; the Royal Holloway University of London and the University of Oxford.

The sediments for this study were all taken from long ocean drill cores. The International Ocean Discovery Program (IODP) coordinates scientific expeditions to drill the ocean floor to recover these sediments, and stores the sediment cores so that they are available to the whole scientific community.