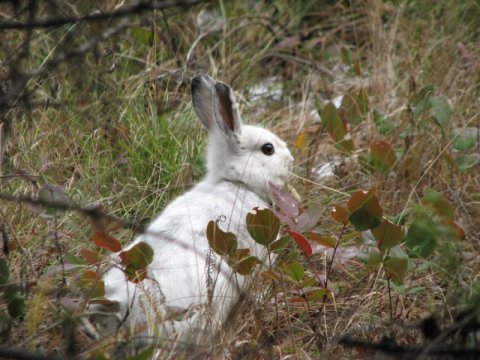 Many animals have evolved fur or feather colors to blend in with the environment and hide from predators. But how do animals stay camouflaged when their environment changes with each new season? Researchers at the University of Montana recently discovered that hybridization played an important role in snowshoe hares’ ability to match their environment.

An international scientific team led by UM Associate Professor Jeffrey Good and graduate student Matthew Jones set out to discover how snowshoe hares have evolved to molt to a white coat in areas with prolonged winter snow cover while populations from mild coastal environments of the Pacific Northwest retain brown fur year-round.

“Like other seasonal traits, the autumn molt in snowshoe hares is triggered by changes in day length,” Good said. “But the color of their winter coat is determined by genetic variation that has been shaped by evolution to match the local presence or absence of snow.”

In a new article published in the journal Science, Good’s team discovered that the development of brown or white winter coats in snowshoe hares is controlled by genetic variation at a single pigmentation gene that is activated during the autumn molt.

“This result is exciting because it shows that critical adaptive shifts in seasonal camouflage can evolve through changes in the regulation of a single gene,” Jones said.

The genetic discovery came with a surprising twist.

“When we looked at the same gene in other closely related species,” Jones said, “we found that the brown version of the gene in snowshoe hares was recently acquired from interbreeding with black-tail jackrabbits, another North American species that remains brown in the winter.”

Hybridization between species has played a key role in the development of many domestic plants and animals, and recent research suggests that it is also surprisingly common in nature. In snowshoe hares, hybridization with black-tailed jackrabbits provided critical coat color variation needed to adapt to coastal areas where winter snow is ephemeral or absent. But what does this mean for snowshoe hares going forward?

“Brown winter coats are currently rare across the range of snowshoe hares,” Good said. “If snow cover continues to decrease due to climate change, brown winter coats may become more common in the future and play a critical role in the resilience of this species. These discoveries are helping us understand how organisms adapt to rapidly changing environments.”

UM Professor Scott Mills is a co-author on the paper. For this research, UM partnered with the Universidade do Porto and CIBIO-InBIO in Portugal, North Carolina State University, Arizona State University, Ecole Polytechnique Fédérale de Lausanne in Switzerland and University of Cambridge in the United Kingdom.