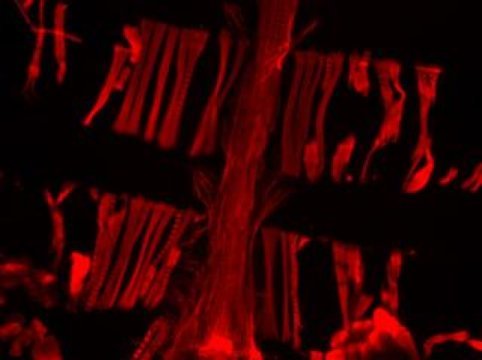 Our cells tend to lose their shape as we grow older, contributing to many of the effects we experience as aging. This poses particular problems for the heart, where aging can disrupt the protein network within muscle cells that move blood around the body. A new discovery in how heart muscles maintain their shape in fruit flies sheds light on the crucial relationship between cardiac function, metabolism, and longevity.

Researchers from the University of California, San Diego discovered that maintaining high levels of the protein vinculin — which sticks heart muscle cells to one another — confers health benefits to fruit flies. Their work, published in APL Bioengineering, from AIP Publishing, shows that fruit flies bred to produce 50 percent more vinculin enjoyed better cardiovascular health and lived a third of their average life span longer.

“You can imagine many people question why it is important to study the hearts of fruit flies,” said Adam Engler, an author on the paper. “But what we’re finding is that improving the function of these 100 or so heart cells can have a big impact on the metabolism of the fly.”

By breeding flies with complementary genes, Engler and his colleagues created a genetic switch that turned on extra copies of the vinculin-coding gene. To ensure that only cardiomyocytes were producing the protein, the group used the same activation machinery as a heart development gene called “Tinman.” Engler explained that gene got its name “because you couldn’t have a heart without it.”

While typical fruit flies live for roughly six weeks, flies that made more vinculin survived up to nine weeks. Additionally, flies with a vinculin boost were more active and able to climb the walls of their enclosures, a test of fruit fly athletic ability.

“Their quality of life is a lot better, although, that can sometimes be hard to measure,” Engler said. “You can’t simply put them on a treadmill and say, ‘Go.'”

Engler and his group were surprised how much improving cardiac function also helped the flies maintain a healthier metabolism. To measure this improvement, researchers fed the flies a special form of glucose and detected how the flies modified and used the sugar.

Flies with more vinculin broke down more glucose than their counterparts. The team concluded higher vinculin levels in the flies’ hearts enabled other organs to efficiently get the nutrients they needed in the breakdown process.

The group hopes to one day see their work lead to pharmaceutical solutions for humans that boost vinculin expression.