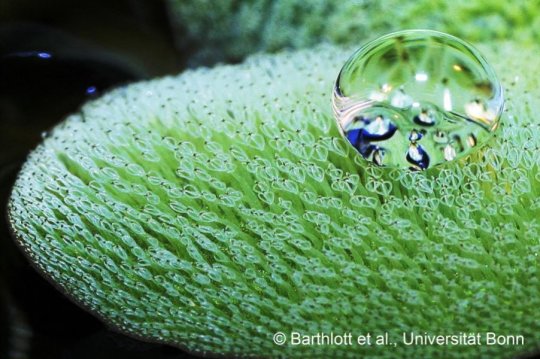 If ship hulls were coated with special high-tech air trapping materials, up to one percent of global CO2 emissions could be avoided. This is the conclusion reached by scientists from the University of Bonn together with colleagues from St. Augustin and Rostock in a recent study. According to the study, ships could save up to 20 percent of fuel as a result of reduced drag. If so-called antifouling effects are also considered, such as the reduced growth of organisms on the hull, the reduction can even be doubled. The study has now been published in the journal Philosophical Transactions A.

Ships are among the worst fuel guzzlers in the world. Together, they burn an estimated 250 million tonnes per year and emit around one billion tonnes of carbon dioxide into the air — about the same amount as the whole of Germany emits over the same period. The main reason for this is the high degree of drag between hull and water, which constantly slows the ship down. Depending on the type of ship, drag accounts for up to 90 percent of energy consumption. This also makes it a huge economic factor: After all, fuel consumption is responsible for half of transport costs.

Drag can be significantly reduced using technical tricks. For example, the so-called “microbubbles technology” actively pumps air bubbles under the hull. The ship then travels over a bubble carpet, which reduces drag. However, the production of the bubbles consumes so much energy that the total savings effect is very small.

Novel high-tech coatings may promise a solution. They are able to hold air for long periods of even weeks. “Around ten years ago, we were already able to demonstrate on a prototype that in principle it is possible to reduce drag by up to ten percent,” explains Dr. Matthias Mail from the Nees Institute for Biodiversity of Plants at the University of Bonn, one of the authors of the study. “Our partners at Rostock University later achieved a 30-percent reduction with another material developed by us.” Since then, various working groups have taken up the principle and developed it further. The technology is not yet mature enough for practical use. Nevertheless, the authors forecast a fuel-saving potential of at least five percent in the medium term, but more likely even 20 percent.

In their publication in the  journal Philosophical Transactions of the British Royal Society, founded by Isaac Newton, they calculated the economic and ecological advantages this would bring. For example, a commercial container ship on its way from Baltimore (USA) to Bremerhaven could reduce its fuel costs by up to 160,000 US dollars. Worldwide, emissions of the greenhouse gas carbon dioxide would be reduced by a maximum of 130 million tonnes.

Taking into account the reduced growth of barnacles and other aquatic organisms, which causes enormous additional drag loss, this quantity even rises to almost 300 million tonnes. This corresponds to almost one percent of global CO2 emissions. “Of course, these figures are optimistic,” says Mail. “But they show how much potential this technology has.”

The high-tech layers are based on models from nature, such as the floating fern Salvinia molesta. This is extremely hydrophobic: When submerged and pulled out again, the liquid rolls off it immediately. After that, the plant is completely dry. Or to be more accurate: It was never really wet in the first place. Because underwater the fern wraps itself in an extremely thin dress of air. This prevents the plant from coming into contact with liquid — even during a many weeks-long dive. Scientists call this behavior “superhydrophobic.”

Salvinia has tiny egg-beater-like hairs on the surface of its leaves. These are water-repellent at their base, but hydrophilic at their tip. With these hair-tips, the aquatic fern firmly “pins” a water layer around itself. Its little dress of trapped air kept in place by the water layer. Perhaps this principle will soon cause a sensation in a completely different context: as a potent lubricant for oil tankers.