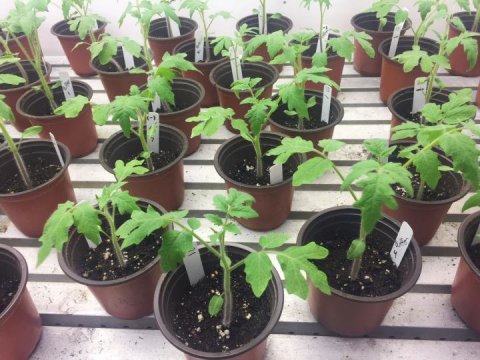 A new study of the role microbial communities play on the leaves of plants suggests that fertilizing crops may make them more susceptible to disease.

University of California, Berkeley, biologists found that spraying tomatoes with microbes from healthy tomatoes protected them from disease-causing bacteria, but that fertilizing the tomatoes beforehand negated the protection, leading to an increase in the population of pathogenic microbes on the plants’ leaves.

While the researchers don’t yet know whether the increased number of bad bacteria on the leaves actually makes the tomatoes sick, the study clearly shows that fertilizer throws the community of microbes on the leaves off-balance. That potentially could allow disease-causing organisms to enter the plant.

“When we change the nutrient environment that plants are in, we are fundamentally altering the plant-microbiome interaction and also, importantly, the microbiome-mediated protection of natural plant/microbe interactions,” said senior author Britt Koskella, a UC Berkeley assistant professor of integrative biology.

The fertilizer effect was not the only surprise from the study, Koskella said. She and co-author Maureen Berg, a graduate student, were investigating how the density of the microbial community on the leaves affected the plants’ resistance to disease and discovered that a lower dose of beneficial microbes sprayed on the leaves was often more effective in protecting the plants from infection than higher doses. Berg sprayed leaves with an artificial microbial community composed of 12 species of bacteria taken from the natural microbiome of healthy tomatoes.

“We found that the most protective community was the most dilute, the least concentrated, the lowest dose,” she said. “This was completely nonintuitive. A medium dose gave medium protection and the highest dose was the least protective.”

The reasons are unclear, but the findings are important because organic farmers are talking about spraying crops with probiotics to encourage better growth and disease protection, in the same way that humans consume probiotics containing “good” microbes in hopes of improving their health.

“The fact that we saw this lower-dose/higher-protection effect suggests it is not as simple as just throwing on more microbes,” Koskella said. “There is a lot of work to be done understanding how to apply a plant probiotic.”

She and Berg will report their findings in the Aug. 6 print edition of the journal Current Biology; the article will be posted online July 26.

Koskella focuses on plants’ above-ground microbiomes, or the phyllosphere, a poorly understood community compared to the well-studied below-ground microbiome associated with plant roots, the rhizosphere. Researchers are finding unsuspected activity within phyllosphere microbes, including that some of the bacteria fix nitrogen from the air like root-associated bacteria. Many studies have demonstrated that microbial communities in the roots can promote plants’ nutrient uptake, growth and resistance to disease, and Koskella is investigating whether this also holds true for the above-ground microbiome.

Her experiments are relevant to the issue of treating crops with probiotics, and could help answer questions such as: What is the right mix of bacteria for a given plant? What is the best way to apply this proper mix?

To investigate these questions, Koskella and Berg began by sampling the natural leaf microbes of healthy tomatoes grown in outdoor fields at UC Davis.

They then sprayed the mix on sterile tomato plants in growth chambers at UC Berkeley and, one week later, injected the leaves with Pseudomonas syringae bacteria, which cause tomato speck, a major problem that’s treated with pesticides. The new microbial community on the tomatoes did, in fact, protect the plants from colonization by pathogens, though the microbial communities obtained from some tomato fields worked better than the microbiomes from other fields.

“This phyllosphere microbial community, much like our own skin, is a first line of defense against disease, so we expected to see protection, though we didn’t know for sure,” Koskella said.

Surprisingly, when they varied the concentration of microbes sprayed on the leaves, they found that in many cases low dosages worked better than high dosages.

To find out why, they constructed an artificial microbial community composed of 12 of the species found on natural plants — basically, the 12 that grew best in culture. When they sprayed various dosages of the synthetic community on tomatoes, they got the same result: low, diluted doses were more protective against Pseudomonas than were high, concentrated doses.

Berg repeated the experiment to confirm the puzzling findings, but during one subsequent trial she decided to fertilize the droopy plants first. In that trial, none of the microbiome doses were protective against Pseudomonas. When they repeated the trial with and without fertilization, they confirmed that application of fertilizer abolished the protective effects previously observed.

In each experiment, they judged protection against pathogens by recording the relative population of Pseudomonas compared to the other, mostly beneficial microbes, since a healthy microbiome should effectively compete with a pathogen and knock it down to low levels.

Koskella has suspicions about why fertilizer alters the microbiome, top among them the possibility that the nutrients make healthier leaves, which keeps all the microbes happy and obviates the need for the good microbes to out-compete the bad microbes. She and her group are now pursuing experiments to test that hypothesis.

They still have no idea why probiotic treatment at low dosages works better than high doses, but hope that future research can solve this mystery and help guide the suitable application of probiotics in agriculture.

Nevertheless, Koskella and Berg said, the impact of fertilizer on the leaf and stem microbiome should lead biologists to explore fertilizer’s effect on the root microbiome as well, and on the general health of the plant.

“We have been fertilizing crops for so long it would surprise me if we haven’t already seen consequences of long-term fertilization on how plants interact with their microbes,” she said. “There are a lot of studies that show domesticated plants tend to have very different microbial communities than their wild relatives.”

The big questions are, does that affect the plant’s overall health, and why?