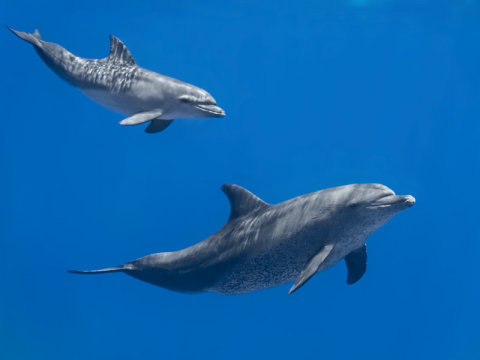 Noise levels in the world’s oceans are on the rise, but little is known about its impact on marine mammals like dolphins that rely on sound for communication. Researchers from the University of Maryland Center for Environmental Science laid underwater microphones on the bottom of the Atlantic Ocean to find out more about the ambient noise levels in the area off the coast of Maryland. They found that dolphins are simplifying their calls to be heard over noise from recreational boats and other vessels in nearby shipping lanes.

“It’s kind of like trying to answer a question in a noisy bar and after repeated attempts to be heard, you just give the shortest answer possible,” said Dr. Helen Bailey, a marine biologist with the University of Maryland Center for Environmental Science who studies protected species in order to understand their habitat use and inform conservation and management. “Dolphins simplified their calls to counter the masking effects of vessel noise.”

Helen Bailey and her assistant Leila Fouda studied underwater ambient noise levels and whistle calls by bottlenose dolphins in the western North Atlantic, which experiences relatively high levels of vessel traffic between shipping lanes and recreational boaters off the coast of Maryland. Acoustic recordings were collected using hydrophones deployed to the bottom of the ocean in the leased Wind Energy Area, approximately 20 miles off the coast.

They found that increases in ship noise resulted in high dolphin whistle frequencies and a reduction in whistle complexity, an acoustic feature associated with individual identification. “The simplification of these whistles could reduce the information in these acoustic signals and make it more difficult for dolphins to communicate,” Fouda said.

Dolphins are social animals, and they produce calls for many different reasons. They talk to each other to stay together as a group, they whistle when they feed, and they even call out their names when different groups of dolphins meet.

“These whistles are really important,” Bailey said. “Nobody wants to live in a noisy neighborhood. If you have these chronic noise levels, what does this mean to the population?”

Normally dolphin calls have a complex sound pattern with rises and falls in the pitch and frequency in their whistles. The researchers found that ambient noise had a significant effect on the whistle characteristics. Bailey and her team analyzed the duration, start and end frequencies, presence of harmonics, and inflection points. With background noise, such as the low frequency chug-chugging of a ship’s engine, their usually complex whistle signatures flatlined.

“We need to be working to engineer quieter boats,” said Bailey. The sound from the ships that were recorded had decibel levels up to 130, just like being near a noisy road. “We need to ask, ‘Is there a way shipping can do it that is more environmentally friendly’.”

Regulations and voluntary incentives to reduce the sound from vessels, with speed limits or quieter engines, could help to decrease the effects on dolphins and other species sensitive to sound.

Materials provided by University of Maryland Center for Environmental Science. Note: Content may be edited for style and length.